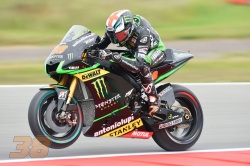 Today’s qualifying session was different from the usual MotoGP script with the rain occurring just as the session began, leading all riders to undertake only a couple of laps and in one fierce pack.

That did not hinder Bradley Smith’s determination to battle as the leading satellite bike in tomorrow’s race, who skilfully guided his Yamaha YZR-M1 around the fast flowing Assen circuit to 6th place in qualifying.

The young British rider produced a firm display today with his performance from yesterday afternoon enabling him to glide straight through to Q2, after this morning’s FP3 session experienced slight rainfall which prevented the riders from improving their lap times.

In the second 15 minute shootout session, the 23 year old rider formidably powered through the tricky conditions to produce a best time of 1.40,818 which will see him start tomorrow’s race from the second row.The lap was fractionally off 3rd place by the blink of an eye with a gap of only 0.086 and his positive qualifying leaves the British rider primed to forcefully battle to beat his previous best result this year of 5th in Austin.

Bradley Smith: – Position:6th – Time:1'40.818 – Laps: 4
"It’s good to get the second row for the race around here tomorrow as the start is always vital to the race whether it’s wet or dry. I am still a little disappointed with myself as I was in a pack of twelve riders and perhaps I should have dropped back so that I could have undertaken the lap on my own without the traffic or distraction of the others. The bike felt good today despite the ever-changing conditions but it was a bit tricky at times. On my only lap, I had a big moment in the last section of the track and at one point I touched the grass so for sure I could have gone faster which is a shame as I painfully close away from my second front row start of the season. Anyway, it’s a decent position to start from and I will use it to get the best possible result tomorrow whatever the weather decides to do."