Smith battles with the best in Superprestigio DTX Superfinal 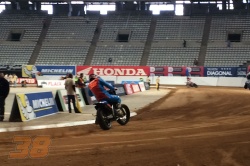 A star-studded line-up consisted of no less than ten World Champions from various motorcycle disciplines around the world, with the competition being split up into the Superprestigio and Open categories as well as featuring talents of the future in the Junior tier. At the end of the night, eight top riders from across and Open went to battle in the 12-lap Superfinal, with proceedings taking place in Barcelona’s Palau Sant Jordi for the second time within the space of a year.

Contact into the first corner saw France’s Thomas Chareyre taken down in a multiple-contact collision which also involved Marquez, as FIM CEV Repsol Superbike Champion Kenny Noyes took advantage to seize the lead. As the race neared its closing stages, the Barcelona-based American was overhauled by both Marquez and Mees who proceeded to go head-to-head. To the delight of the Catalan crowd, it was Marquez who came out on top around the 200-metre dirt track lap by just 0.298 seconds, with Mees and Noyes completing the top three; this marked Noyes' second consecutive rostrum result in the event, coming through a Last Chance Qualifier (LCQ) round just as he had done in the January edition.

The rest of the top eight was rounded out by Spaniards Gerald Bailo and Dani Ribalta plus Great Britain’s Oliver Brindley and Bradley Smith (Smith having won two of his earlier heats), while Chareyre recovered to eighth place. Last year’s winner Brad Baker (2013 AMA Grand National winner) was ruled out of action earlier in the day, having dislocated his left shoulder in a practice crash. The event also featured Moto2™ and Moto3™ title winners Tito Rabat and Alex Marquez, as well as Scott Redding who was making his debut in the Superprestigio.