Smith beaten to 12th place by six-hundredths of a second 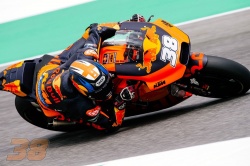 Track temperatures reached almost fifty degrees at the Autodromo de Mugello that was bursting to the fence with fans and MotoGP ‘tifosi’ keen for the latest episode of the FIM World Championship. Bradley Smith and Pol Espargaro launched of the grid with their KTM RC16s and settled into a tussle for the final slot of the top ten. Smith, using a softer tyre choice, set the early running but could not dislodge Espargaro who assumed control in the second half of the 23 lap chase.

Smith took part in a frantic chase to the line and lost 12th place by six-hundredths of a second; the Brit was 14th.


Bradley Smith (Factory Rider MotoGP):
“I loved that race; 22/23 laps in the mix. I pretty much turned myself inside-out to stay in that group for tenth in the first part of the race but then told myself to be smart and to learn something as we went along. It was nice when we were just two KTMs but then Aleix (Espargaro) joined us and upset the rhythm a little bit and he was super-strong in some areas and weak in others. The front tyre pressure went up more than expected and that affected us in areas. (Tito) Rabat dive-bombed me with two laps to go and put me super-wide and (Hafizh) Syahrin was able to get by. I was trying to attack on the last lap and we all came across the line in the same tenth of a second. It was frustrating not to be twelfth – that should have been the minimum today – but to be there fighting with all those guys is more than I expected going into the race. It meant we extracted the best from the bike and gave everything we could.”


Mike Leitner (Team Manager):
“The weekend started in a difficult way for us, especially because the other teams had tested here when we preferred to use Jerez. We had a lot of pressure in the first sessions to find a setting that allowed a good race pace for the guys. Last year we were fifty seconds away from the winner and this time it was down to twenty and just fourteen to the podium. You don't get 11th as a present; you have to fight for that. Bradley was also in the points. We are happy and we know we need to keep pushing to close this gap more and more.”


MotoGP will pause for a week before drifting across to northern Spain and the Circuit de Barcelona-Catalunya for the Gran Premi de Catalunya and round seven of nineteen.