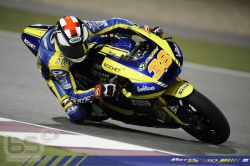 The 20-year-old, starting from the front of the third row for his Moto2 debut, made a fantastic start and after a typically frantic first few corners, Smith found himself on the tail of the leading group in fifth.

Showing the undoubted potential of the Tech3 Racing Mistral 610 machine, Smith settled into a consistent rhythm, comfortably reeling off a series of laps in the low 2.02 bracket to keep a determined Michele Pirro at bay in ninth.

Smith was overtaken by Pirro on lap nine, but the British rider displayed tremendous fighting spirit, refusi ng to let the Italian open up a gap as the 20-lap race unfolded. Far from settling for tenth position, Smith superbly chased down Julian Simon, closing down a 2.2s deficit on the 2010 Moto2 runner-up to pass him with four laps remaining.

Smith kept his cool under enormous pressure from Simon and fellow Spaniard Aleix Espargaro on the final lap to finish in a thoroughly deserved ninth, much to the delight of his Tech 3 Racing crew.

Mike di Meglio also made a terrific start under the Losail International Circuit floodlights, the Frenchman producing an aggressive opening lap to move six places up the order into 13th. He finished in 19th but gained a wealth of information on the Mistral 610 machine to focus on improving when the European phase of the World Championship gets underway in Jerez on April 3.

Bradley Smith 9th – 7-points
“It feels awesome to have got a top ten in my Moto2 debut. I'd always set my heart on a top 15, so this is a real bonus. I feel like I earned it though because I am really tired now and the race was quite tough. Moto2 is obviously a lot more physical than 125s, so I might need to spend even more time in the gym! I learned so much in the race it was unbelievable. Those guys at the front certainly don't hang around and while I'm obviously happy with my result, we've got work to match that pace. I'd say I'm a second a lap behind them at the moment, but I also learned a lot about the bike and what we need to do to take another step. But to pass and hold off a rider as good as Julian is a great feeling too. I guess I owed him one from our time together in 125s. The Tech 3 Racing Team never stop working so I know we will have some improvements for the next race in Jerez. Tonight was as much of a test as it was a race, so we can only get stronger.”

“Bradley did a wonderful job when you consider this was his first race in Moto2 and I have to pass on big congratulations to him and his Tech 3 Racing Team. He was able to pass Jul ian Simon, who was a hot favourite a few weeks ago for the title after he finished runner-up in 2010. And he was always fighting with some of the best riders in the world, so this is a fantastic early boost for his confidence. He was consistent all the way through the race and the experience he gained will only make him stronger for the rest of the season. Mike had a few difficulties this weekend and I think he still lacks a bit of confidence. He was fighting all through the race and never gave up and I'm pleased he was able to hold off Kallio at the end. I am positive Mike is moving in the right direction and we haven't seen anything like what he is capable of.”