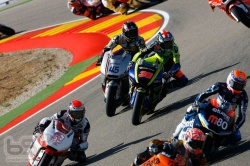 Tech 3 Racing Team rider Bradley Smith fought for the podium right to the chequered flag in a pulsating Moto2 race in sunny but cool conditions at the Motorland Aragon track in Spain this afternoon.

Starting from the third row of the grid, the 21-year-old got his customary fast start and immediately put himself firmly in early contention for his first podium finish of the season when he surged into fifth.

Smith wasted no time in picking up another place on lap two with a sweeping move by Claudio Corti that put him fourth.

As the frantic early pace picked up, Smith lost vital ground and briefly slipped back to ninth, but the podium was always within in his sights and a brilliant charge back into the top six started on lap 10 when he moved by former Tech 3 Racing teammate Mike di Meglio.Smith's prowess for being super fast on worn tyres came to the fore again and he surged back into fifth on the penultimate lap after an epic fight with Johann Zarco.

As the race reached a nail-biting climax the British rider produced a determined effort to try and secure his first rostrum of the 2012 Moto2 World Championship.

He piled the pressure on compatriot Scott Redding and Andrea Iannone but despite a valiant effort, he took fifth but was less than 0.5s away from third position at the conclusion to an enthralling 21-lap race.

Bradley Smith 5th – 96 points:
“First of all I want to congratulate Scott on his podium because he definitely earned it. I put him under a lot of pressure but he didn't buckle and it was a fantastic battle. It was hard but fair all the time and I really had a lot fun battling with him. It was an incredible race and very tough but very enjoyable at the same time. So much happened it is difficult to know where to start but I got a good start and that was crucial because it meant I was pretty much in contention for the podium for the whole race. Despite the lack of dry track time this weekend the Tech 3 Racing Team put a great bike underneath me but I was de finitely missing some top speed. I was having to push a lot on the brakes to make up places but I'd lose out on the straight and it made it hard work. But I still want to say a huge thanks to the Tech 3 Racing Team because we've done a great job and to be so close to the podium again is a fantastic result. Now I hope we can continue this level of performance in the final four races and maybe even get a podium, which would be a great reward for everybody's hard work and dedication.”

Herve Poncharal – Team Manager:
“What an amazing race that was and I think with any doubt it was one of the best of the year. Fortunately for the Tech 3 Racing Team Bradley was right in the heart of the battle with the front group and he did a fantastic job. Like always he had a great start and being fifth out of the first corner put him in a great position to fight for the podium. He capitalised on that start though and although he dropped back a little bit, he never let the top three out of his sight. The final l aps were incredibly exciting and we were really willing Bradley to try and score his first podium of the season. He couldn't have tried any harder and I am proud of the way he fought right from the first corner to the last. Hopefully we can build on this strong result to finish the season in really positive fashion.”