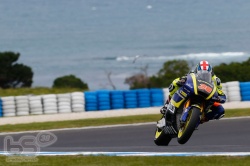 Smith kept himself firmly in the hunt for a top six finish in the final World Championship rankings after he guided his Mistral 610 machine to a determined 12th place at the jaw-dropping Phillip Island track.

In front a packed crowd of over 53,000 fans, the 21-year-old was engaged in an exciting fight with Jordi Torres that went right down to the wire, the Spaniard fending off Smith's relentless offensive to secure 11th by just 0.045s.

Smith now heads to the final round of the 2012 campaign at the Valencia track in Spain still in with a shout of sixth place in the final Championship standings, with the gap to Mika Kallio in sixth reduced to 11-points.

Bradley Smith 12th – 108 points:
“That was a tough race and really hard work to finish in the points today. We have experimented with the set-up of the bike a lot all weekend and while we never really got it to where I was completely comfortable and confident, the bike felt good in the race and the Tech 3 Racing Team did another great job. The main issue was a lack of rear grip and that was our problem all weekend. We've got plenty of data to analyse and work on improving in that area for the last race in Valencia, where I'm determined to finish my time in Moto2 with a strong result. With Kallio not finishing as well I still have a chance to finish sixth in the championship. It will be difficult but it definitely gives us a bit more motivation to take into the last race.”

Herve Poncharal – Team Manager:
“It wasn't an easy weekend for the Tech 3 Racing Team, so to head home with both Bradley and Xavier inside the points is a satisfying way to end this long spell in the Championship. The Moto2 grid didn't have the best weather conditions all weekend, so I think we prepared the best we could and Bradley got the maximum potential out of the Mistral 610 machine. Bradley's pace in the second half of the race was fast and constant and I think he would have been in the group battling for fourth if he had a little bit more confidence in the beginning. Xavier had a crash this morning that dented his confidence a little bit but he recovered well and it was a pity he wasn't closer to the fight with Bradley and Torres to try and get a few more points. Both of them rode with a lot of determination and they never gave up, so we can go to the final race in Valencia hoping they will be inside the points again, but hopefully much higher up the rankings.”