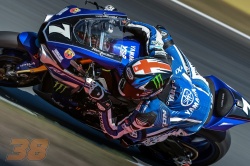 Mixed free training session for YART at the Motorsport Arena Oschersleben this morning, with the timing screens showing a Yamaha top 3 with Yamaha Austria Racing Team topping the time sheets.

Monster Yamaha Tech3's Bradley Smith suffered a crash towards the end of the session with Initial reports suggesting a broken femur. After receiving medical treatment it was confirmed that he has sustained lacerations to his leg with possible knee damaged but cleared of having broken any bones. Bradley remains in hospital after an operation earlier and is receiving further assessment.

The Yamaha Austria Racing Team set the pace in the first rider session of Q1 and again in the second rider qualifying 1 session, this time with a 1.175s advantage over their closest rivals. Only beaten by team 3ART Yam Avenue's Lukas Trautmann who qualified in first place in today's third rider qualifying with a strong 1'27.288s lap!

Having completed an eventful day YART managed to hold on to the #1 spot in the time sheets. After Q1 they have a 0.967s margin to their closest rival.