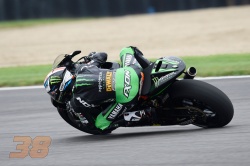 Bradley Smith completed an effective qualifying campaign, despite falling on the final lap in qualifying practice 2 to place his Yamaha YZR-M1 on third row for tomorrow’s 27 lap sprint around the world famous Indianapolis circuit.

Having began yesterday’s opening day of practice positively by clinching 2nd in the first session, Smith continued the forward momentum today in FP3 to post a best time of 1’33.202, seizing 8th position and allowing him to pass straight through to the final fifteen minute qualifying shootout.

This afternoon the Monster Yamaha Tech3 rider posted a best time of 1’32.343 deep into the session and only two tenths from 4th place, yet unfortunately fell on his final lap. Smith again wounded his previously injured finger, but will still be able to compete tomorrow. His time was strong enough to retain 9th and he will now aim to undertake a trademark forward start before undertaking a spirited performance to achieve a competitive result  tomorrow.

Bradley Smith: Position: 9th - Time: 1'32.343 - Laps: 7
"It goes without saying that a fall is never the most ideal way to complete the session, but fortunately I am all ok for tomorrow’s race and have only reopened my finger. The cause of the fall was because I was asking a little too much of the rear tyre as it would have lasted a maximum of almost two laps, but I tried to do three. The time itself was acceptable and I am happy to be on the third row, even though I know I could have been faster. The team and I undertook some really positive work during FP4 to prepare ourselves for the race where I used the hard tyre which certainly felt comfortable. We have made no decision on the choice of compound for tomorrow, but we’ll wait and see how the grip levels are in warm up before tactfully deciding. Either way, I am happy with either choice of tyre as well as how the Yamaha feels and so am looking forward to getting a strong start plus having a positive race from the third row."