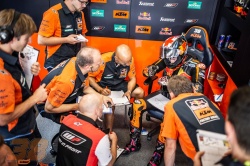 Back at the Brno circuit and under warm Czech skies, Bradley Smith rounded the layout 68 times, and logged the 13th fastest lap on the KTM RC16; 1.3 seconds from Marc Marquez’s best. Smith registered the third highest number of circulations from the twenty riders active on development work for 2018 as the MotoGP field also evaluated Michelin’s new front tyre model.

Medical checks for Pol Espargaro in Barcelona for the collarbone injury sustained in warm-up for the Grand Prix of Czech Republic revealed the break to the bone was not as bad as initially feared. The Spaniard will not require surgery but is being kept in hospital for evaluation for the next few days and is almost certain to miss the team’s home event in Austria this weekend.


Bradley Smith (Factory Rider MotoGP):
“We took the chance to test some things here that we’d tried at other tracks and that helps to widen our collection of data and to see if the improvements we make can work on every circuit. We continued to work on chassis and swinging arms today and I confirmed which ones I’ll want to use for the upcoming races. We had a few different ideas for electronics as well. We were going through the test items and overall it was a positive day. It was a shame that both Mika and Pol were not here as it would have helped us a bit more but I hope they get well soon.”


Mike Leitner (Team Manager MotoGP):
“Pol was checked in Barcelona on Monday morning and we had the positive news that he wouldn't need surgery for what is just a crack, rather than a full break to his collarbone. There was also no damage to other bones or to his spine. He will have another check this week when the swelling has reduced. Pol needs to rest and we’ll have to keep assessing and controlling his situation as he has a lot of neck pain. He’ll stay in hospital until the end of the week so for sure he will not make the Grand Prix at Spielberg. With regards to the test, Bradley has done well and worked hard to go through the programme even if we could not do everything we’d planned. I think what we have discovered should be able to help us in the second half of the year.”


Red Bull KTM can now look towards the Grand Prix of Austria at the Red Bull Ring for round eleven of nineteen in the coming days.