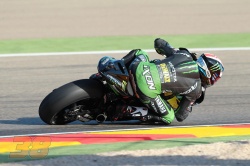 Monster Yamaha Tech3 Team rider Bradley Smith battled his way to 8th position in the demanding 23 lap sprint around the MotorLand Aragon circuit today aboard the Yamaha YZR-M1. When the lights went out, the young Briton undertook a decent start from 10th to close the first lap one position higher from where he began. He then built up his speed before firmly setting into his race rhythm as he confidently attempted to force his way into the top six.

By the end of the 7th lap, Smith was running comfortably in 6th as he homed in on Andrea Dovizioso ahead. However, he unfortunately ran wide eleven laps from the end and was shuffled back two places. Nevertheless, the 24 year old remained focused and set his sights on closing back in on the fierce fight for 5th, with Cal Crutchlow in front of him. Smith pushed onwards as he continued to plug the gap and on the last lap he was still right behind Crutchlow, but despite his best efforts, he fired across the finish line in 8th. The result sees the young British rider still hold his record of completing every round this season in no lower than 8th. Furthermore, he remains as one of only three MotoGP riders who have concluded every race and he will now confidently head to Japan for the 15th event of the 2015 World Championship.

Bradley Smith: – Position: 8th – Championship:5th – Points: 143
“I have to be happy with the result today after what was certainly a tough race at Aragon. All of the different manufactures were in the group that I was fighting in and each one was stronger in different areas of the track. As a result, the pack was really competitive and all of us were pushing as much as we could. Unfortunately, I made the mistake when I was right behind Dovizioso and  almost ran into him. To avoid this, I had to go wide and it took me ten laps to make up that second that I lost which just proves how easily matched we all were. Yet, I am pleased with the result, especially considering that things didn’t go exactly as we wanted them to this weekend. Moreover, we were still in the hunt for 5th today which I was not convinced about before the start of the race. Therefore, to come away with this result and without loosing too many points in the championship is overall quite positive. In addition, it’s easy to make a mistake at a track like this, so I am happy to have kept it on two wheels! Next up is Motegi which I am looking forward to. The track layout is gruelling but I feel that I can run well there and I hope to give the Japanese fans a good show.”

Hervé Poncharal - Team Manager:
"It was another top ten finish for our two guys, but in all honesty, I can’t hide that we were expecting a bit more in terms of the final results today. Both of our boys had good starts and Pol was right up there with the leaders and looking good. However, he made a mistake and lost contact with the group which was a shame but he regrouped and fought right until the end in the second pack which was clearly where the action was. As for Brad, he did a good job also and to collect another set of points strengthens his championship fight. In the race, we knew he had a similar pace to Pol, even though the qualifying position was not ideal. So to have both guys finish inside the top ten is solid, yet we are a strong team and very competitive, so we need to find something more for the next races. We could have possibly been a position or two higher, but at the moment the four guys in front ride with a different rhythm and are very quick. The 25 second gap from the leader back to our guys is too big and this is what we have to work on. Tomorrow there is an important test and it will be interesting to see what we can do and improve. Today, we did our best and next is Japan where we hope to obtain two results on Sunday that are a bit higher up the field."