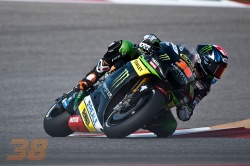 ​Monster Yamaha Tech3 team rider Bradley Smith produced a spirited performance in qualifying today after working relentlessly to turn around his fortunes in Texas. The 25-year-old began the day by carrying on his efforts as he fought his way around the physical and meandering circuit before finishing with a time that meant he would contest in QP1. Here, he got straight up to speed and posted an impressive lap that was over a second quicker than his personal best in FP3. The strong time marked a significant improvement for Smith who worked closely with his team in preparation of the following 15-minute shootout. When it commenced, the Briton continued where he left off and eventually powered to a time that will see him begin the Grand Prix from the middle of the fourth row. The 2015 fastest satellite rider now has his sights set on sealing a top tier finish in tomorrow’s 21 lap race.

Bradley Smith: – Position: 11th – Time : 2'04.988 – Laps: 7
"Firstly, I have to give a big thanks to the team because they didn’t pause from working throughout today and they never stopped believing in me or the direction that I wanted to go towards regarding the feeling of the bike. Without their efforts, it wouldn’t have been possible so again, I must thank them. Yesterday we made a few big adjustments and still struggled. However, step by step we’ve now come back to where we need to be due to our work in the third and fourth practice sessions today. Of course, I still believe that we can improve further tomorrow and we have a good chance to do this in the warm up as well as later in the race. I feel a lot more positive with the bike that I now have underneath me for the GP. Yet, having said that we still need to make a decision regarding the tyre choice, because we were working so hard on the setting of the bike that we didn’t decide on the tyres. It’s a fantastic result by my team and I’m really pleased with this position so now I look forward to seeing what we can achieve in the race.”