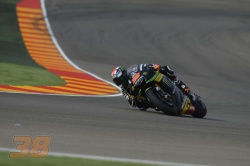 Bradley enjoyed a superb second day at the 14th round of the World Championship campaign. Overnight rain left the track littered with damp patches this morning and prevented Smith from trying to climb into the top 10 at the end of FP3 to move immediately into QP2.

The 22-year-old dominated QP1 with a best time of 1.49.724 and he then shaved off almost a second in the second 15-minute session to secure a grid position just one place behind Crutchlow in eighth.

His personal best time of 1.48.854 was just over a second off pole position and a fraction outside of 0.2s of the more experienced Crutchlow, with Smith emphatically proving his 13th position yesterday did not accurately show his true potential.

With tweaks to his riding style paying off immediately today, Smith is now full of confidence that he can battle for a ninth top 10 finish of an impressive rookie premier class campaign.

Bradley Smith 8th 1.48.854 – 8 laps:
“The last two races have been pretty dismal, so it is great for me to be able to turn it around this weekend. I said yesterday that I didn’t feel 13th was a true reflection of my potential and thankfully I was able to show that was the case today. The bike felt great and I have to say a massive thanks to my Monster Yamaha Tech 3 crew. We had a long meeting last night and there were a lot of positive things that came out of it. I was able to change my riding style like they suggested and I got more feeling from the bike and the lap time was a big step from yesterday. Eighth is the position where I expect to be given the competitiveness of the package I am on. Today I got the good feeling back with the bike that I had in Brno and now I am really excited for the race. Tyre life will be the key tomorrow but hopefully I can race in front of the bikes of Dovizioso and Hayden and not behind them.”