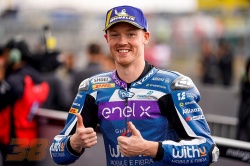 British rider is the first person to achieve rostrums in 125cc, Moto2™, MotoGP™ and MotoE™

After crossing the line second in the first-ever FIM Enel MotoE™ World Cup race at the HJC Helmets Motorrad Grand Prix Deutschland, One Energy Racing’s Bradley Smith became the first rider to achieve a podium in the 125cc, Moto2™, MotoGP™ and MotoE™ classes.

Smith’s first Grand Prix podium came in the form of a third place at the French GP in 2007 while riding the Repsol Honda 125cc machine, and the British rider would go on to claim 19 more lightweight class rostrums before moving up to the Moto2™ class in 2011. In his rookie season, Smith secured three podiums on the spin, his first coming at his home Grand Prix in Silverstone before two third-place finishes at Assen and Mugello followed. In the premier class, the number 38 picked up two podiums. The first was a P3 at the Australian GP in 2014, while in 2015 he recorded a P2 at the Misano World Circuit Marco Simoncelli.

And having taken P2 after starting from P7 in the inaugural MotoE™ race, Smith now sits among riders like Valentino Rossi and Maverick Viñales who have also stood on the podium in four different categories.

“To be honest I was quite disappointed with myself after the E-Pole, seventh position just wasn’t good enough,” began Smith, chatting after standing on a Grand Prix podium for the first time since 2015. “But then I knew I could do something in the race and if there was anything I could do, it was on the start and the first two/three corners because I know these guys don’t know the Michelins in the 50/50 conditions let’s say.

“It was nice to lead the race, I lacked some knowledge from missing the race simulation in Valencia honestly because the guys – they go fast in some areas. And I need to improve, but I’ve learnt a lot in this short race, five laps, and I know where to improve for the Red Bull Ring so yeah, I’m really happy, thanks to the team, they changed the bike from yesterday. We took a gamble, it worked and damage limitation because seventh position was bad yesterday but second, we’re only five points behind the Championship leader so that’s good for Round 1.”

The Aprilia Racing Team Gresini test rider now sits five points off race winner Niki Tuuli (Ajo MotoE) in the overall standings. The 18 Energica Ego Corsa riders will be back on track for Round 2 of their season at the Red Bull Ring in Austria.