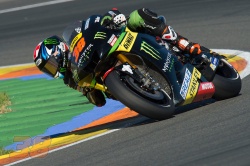 Bradley Smith began his in-depth and methodical work with his new MotoGP bike for the forthcoming year whilst also continuing to the test the Michelin tyres. The Briton rode relentlessly and eventually completed more laps around the circuit than any other MotoGP rider today, outlining his intent to understand his new Yamaha YZR-M1 as well as the tyres fully. He set a personal best time of 1’31.694 which was only 0.075 from his teammate and now the 24 year old rider confidently awaits the next outing at the three day Sepang Test in February.

Bradley Smith: – Position: 10th – Time: 1'31.694 – Laps: 71
"We can be pleased with what we have achieved and it was a big day where I completed 71 laps as we focused on my new bike for 2016. The team and I needed to understand what sort of Yamaha we will ride next year, which in all honesty, was a big task as we had to go through everything thoroughly. This wasn’t necessarily to make things better instantly, but it was for knowledge which will help to prevent any potential issues in the future. After last year, we know how vital this is and hence, this is why I rode so many laps. In the end, we ran out of soft rear tyres so I had to use the hard compound, but I was still able to improve my time from yesterday even though the conditions were a bit tricky in the last hour here. In addition, we should only compare my lap time to the other satellite riders as we had just two front and rear compounds available, while the factory guys had more options to try. Altogether, I’m satisfied as it has been a positive day and we now have a very good understanding of the bike as well as a solid base to start 2016 with. It’s time to pack away my M1 for the winter break and I look forward to seeing it again in February!”