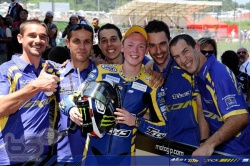 In searing hot temperatures that came close to reaching 30 degrees, Smith was involved in an enthralling fight for the victory throughout the entire 21-lap race, the Briton challenging Marquez, Stefan Bradl, Alex de Angelis and Andrea Iannone in front of a sun-drenched Italian crowd.

He displayed his ability to maintain a fast and consistent pace on worn tyres to seize the lead with just three laps to go. Marquez and Bradl quickly launched a counter attack and despite a renewed effort to force his way back into victory contention, Smith crossed the line in third position.

The 20-year-old though demonstrated how competitive the Tech3 Racing Team's Mistral 610 machine is in the dry after back-to-back rostrum finishes in wet conditions at Silverstone and Assen and he was only 0.419s behind Marquez.

Bradley Smith 3rd – 7 9 points:
“We had the podiums in the wet in the last two races and that gave me great confidence, but we did a great job this weekend to show we are competitive in the dry as well. I got on the front row yesterday and to be honest I wanted to lead Marc and see what happened. But it was awesome to be able to run with Marc and Stefan today. We've seen already this season that they are the two strongest riders in Moto2 but I finished right behind them today and kept them under pressure for the whole race. That shows what a huge step I've taken in the first eight races but also the amazing job the Tech 3 Racing Team has done. I had another modified chassis to try this weekend, so the guys never stop working and we are really reaping the benefits. My Mistral 610 bike worked awesome today and I tried to give myself the best opportunity to win by going to the front a couple of laps from the end. I was just committed because I was l osing a bit compared to Marc on the straight, but I didn't quite have the speed to match them on the last lap. The pace was so hot but I couldn't quite get them back, despite pushing at my absolute maximum. I want to say a big thanks to my Team again, because without them none of this would've been possible. They've created an environment for me that I can just go out and race as hard as I can. Three successive podiums is definitely proof of that and now I am looking forward to going to Sachsenring.”

Herve Poncharal – Team Manager:
“We had already had a really strong weekend with Bradley getting his first front row start since he joined Moto2. But after Warm-up we were very worried because Bradley was complaining a lot about a right arm problem. He had a lot of pain and no more power. When the race started and I saw him in the front group I was very happy, but I could not stop thinking, 'is he going to last the distance?' But lap after lap he was there and he was incredible. This was an important race for him as before he did have two podiums, but they were in wet conditions, and I think still for him there was a question mark in the dry. He went through the pain with his right arm, but he finished third and was leading the race for a moment. To stay with Bradl and Marquez means a lot as they are both very strong . And Iannone and de Angelis are very fast here, but in the end they were not fast enough to stay with Bradley. I think these three guys are the best riders in the Moto2 Championship and we move up into third in the points. This is an incredible result for us and it shows how much Bradley is learning and his confidence will only grow.