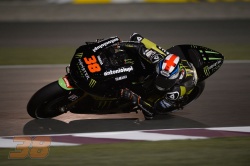 Bradley Smith’s long-awaited MotoGP debut started brilliantly with a lightning start off the line saw him pass Marquez on the run to the first corner to move into the top six.

As the early action intensified, Smith settled into a comfortable rhythm and he was just about to launch an assault on the top 10 when he crashed out unhurt on lap five at the seventh corner.

Bradley Smith DNF:
“It is frustrating to crash out of my first MotoGP race so early because I need to be gaining all the experience I can. We changed the bike for tonight and the bike was much better on corner entry. Unfortunately I lost the front at Turn 7 and I was down. I’d had a couple of warnings and I will know for the future that I am close to the limit when that happens. There are a lot more positives than negatives to come out of this weekend but I can’t deny it would have been great to start the year with a top 10 finish. We move onto the next race in Austin where the goal again will be to build up my experience and learn more about the bike.”

Herve Poncharal – Team Manager:
“It has been a positive start to the season and It was a big shame for Bradley because it would have been good to start the Championship inside the top 10. He really could have picked up a lot of information to get more experience to learn from, but these things can happen and the crash shouldn’t detract from the fact that he had a very encouraging weekend that bodes well for the future. We are looking forward to seeing his development during the next races but I’ve no doubt he is going to be regular inside the top 10. I also want to pay huge compliments to Yamaha for an incredible start to 2013. Jorge was outstanding and showed why is the World Champion and Valentino showed in the last five laps that this year could be fantastic.”