Smith finishes championship in one piece 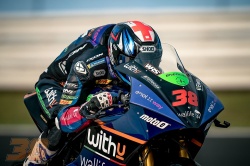 Luckily, the final race for the FIM Enel MotoE World Cup at the San Marino Grand Prix was not affected by the weather. Although the weather forecast wasn’t too promising, the guys found dry asphalt in the eight-laps race.

Niccolò Canepa, who started again from seventh on the grid, enjoyed a decent start overall despite losing a couple of places. Afterwards, the Italian made his way into the group and got immediately close to the podium contention, but lost precious time while fighting against another rider. The #7 rider showed strong pace potential matching the times of the top group, but eventually couldn’t close the gap to finish in P6.

Meanwhile, Bradley Smith got a better getaway than yesterday and went even more into race mode on Sunday. The Englishman started from row six and gained one position in the opening lap. He tried to catch the group in front of him, nevertheless he got stuck in the pack and couldn’t progress more. At the end, Smith unfortunately missed out on points just at the finish line while he was fighting for P15, eventually crossing the line in 16th for a small margin.

So, that means Niccolò Canepa finished 7th overall in the championship standings, while Bradley Smith was able to rescue some points despite a really complicated season for him to land himself into 18th.


Bradley Smith:
"The start was a little bit better than yesterday, I thought there was a possibility to be able to stay with the group ahead. I really tried and improved the lap times from Saturday but when the tyre started to drop I was really struggling. We didn't find the optimum setting and performance, but not for a lack of trying. It has been a really tricky season with all my injuries, but big thanks to the team, to the mechanics, a lot of hours waiting during the MotoE weekends for not racing, I really appreciate all the effort from all the guys and we made through the season in the end, made the last race and now I'm in one piece, so, thank you."


Raglan Razali - (Team Principal and Founder WithU GRT RNF MotoE Team):
"It was a consistent weekend in some ways for Niccolò, with another sixth in Race 2, consistent with the result in Race 1 and the same goes for Bradley. So, we finish the championship in 7th and 18th, full of drama this year with the injuries of Bradley, the technical issues, but this is the best we could do. Anyway, we should keep like this and make an even better job in 2023."

Filippo Conti - (Team Manager WithU GRT RNF MotoE Team):
"We cannot hide the fact that it was a complicated season, but there were also many positive things. We scored podiums and had to handle very thorny situations, but the team and the riders always responded. So, our 2022 was a good one overall; it is a shame this weekend to have been a bit stuck in the group in both Race 1 and Race 2 with Niccolò where we could have aimed for a podium, but we brought home consistent results. We are also happy to have been able to end the year with Bradley. I would like to thank the sponsors, the team, the riders, Razlan and the RNF Team for the great support. We need to keep working like this, the path set is right, to collect even more in 2023."