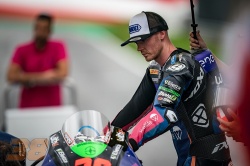 Although the rain clouds luckily stayed away also for the second race of the FIM Enel World Cup at the Red Bull Ring in Austria, the WithU GRT RNF MotoE Team hasn’t been too lucky.

Niccolò Canepa, who had a strong pace all weekend long, started from the second row of the grid once again this afternoon. Yet, he didn’t have a decent chance to really fight for strong positions, which the Italian rider and the WithU GRT RNF MotoE Team have been hoping for. He went back to P12 quite early in the race and couldn’t keep the speed aboard his Energica Ego Corsa machine throughout the race. He eventually grit his teeth to still collect some important points and crossed the line in 12th, without a realistic chance to do any better.

Meanwhile, Bradley Smith was more than unlucky in yesterday’s first race. The Englishman had a huge highside on the opening lap and was then transferred to the local hospital, where he was detected with a broken bone on his left foot. He was therefore forced to skip race two today and will work on his recovery back home.

In less than two weeks’ time, the FIM Enel MotoE World Cup will head into their final round of 2022, which takes place at the Misano World Circuit Marco Simoncelli.

Bradley Smith:
“Unfortunately, I had a nasty highside at turn two b on the opening lap. I'm still scratching my head to what actually went wrong as it was very late on corner exit. In the crash I have fractured my fifth metatarsal on my left foot. I'll head back home to work with my medical crew, and keep you updated on a recovery timeline. Misano isn't far away, but let's remain optimistic.”