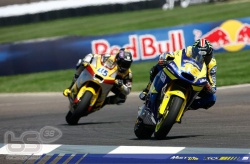 Bradley Smith started and finished today's Moto2 race at the legendary Indianapolis Motor Speedway in fourth position, the British rider fighting for a podium finish throughout the 26-lap race.

The Tech3 Racing Team rider made an electrifying start from the second row to lead into the first turn and as the race developed in hot and humid conditions,  the 20-year-old was constantly in contention for his fourth rostrum finish in the last six races.

Once again showcasing the high level of performance of the Mistral 610 machine, designed and developed in France by the Tech3 Racing Team, Smith brilliantly held off late pres sure from compatriot Scott Redding to try and hunt down Esteve Rabat and Pol Espargaro in the chase for second spot.

The British rider gave his maximum effort until the chequered flag but he was never able to get close enough to attack the Spanish pair and he finished just over a second behind third placed Rabat.

Today's result was Smith's fifth top four of the season and his 13-point haul maintained his brilliant challenge for third place in the overall World Championship standings. With six races remaining, rookie Smith is sixth in the rankings but only four-points behind Andrea Iannone in third.

Bradley Smith: 4th – 92 points:
"Fourth position is a little bit frustrating as we were all working for a podium all weekend. It was a great race but to get so close to the podium and see it all through the entire race is a little bit disappointing. But we got some really important points back in the Championship and I'm firmly in the hunt for third overall, which in my rookie season is a fantastic achievement. After not finishing the last two races in Sachsenring and Brno, completing the race distance meant that we learnt a lot. We are able to take the data with us and analyse it for the final part of the season to improve the bike even more because we already have a really competitive package. There are a few things that we need to work on, especially with rear grip. That's where Rabat and Espargaro seemed to have a slight advantage today. I need to say a big thanks to my Team though who have done an incredible job once again this weekend. Now I am ready to get home for a brief rest before getting ready to return strong for Misano."

Hervé Poncharal: Team Manager:
"The last two races in Germany and Czech Republic were bad results for the Tech 3 Racing Team but we are so glad to see Bradley back at the front where we know he can be. He finished fourth in qualifying and fourth in the race, but that doesn't tell the whole story. He made an incredible start to get the holeshot and was leading the race and never gave up. Marc Marquez was in a race of own today but Bradley was also very strong and I am happy that we are back in the battle for third place in the Championship. We are sixth now, but only four-points away from third, so we are right back in the hunt. I hope we are going to carry on like that for the next races because Bradley is having a fantastic rookie season. It is a shame for Mike because he started the weekend really well, but for some reason he could not make qualifying and the race at his best level. We need to analyse what went wrong and hope to return stronger in Misano.”