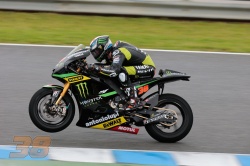 Although there was no repeat of yesterday's torrential rain, much brighter skies and a strong wind didn't dry the track quickly enough for any meaningful testing to commence until after 1pm.

A dry track presented rookie Bradley Smith with the ideal opportunity to put in vital laps on slick tyres after yesterday's rain had restricted him to just 14-laps on Bridgestone's wet weather rubber.

Smith was able to complete 41 laps this afternoon and gain valuable time on track as he continued to adapt to the YZR-M1 machine. He set a personal best time of 1.41.398 that left him less than 0.1s outside of the top 10 and only 0.7 s away from the top six. He also grasped the chance to pursue nine-times World Champion Valentino Rossi for a short spell earlier, learning how to improve his riding technique to suit the heavier and more powerful YZR-M1 after a two-year spell in the Moto2 category.

Bradley Smith 12th 1.41.398 – 41 laps:
“Today was positive because I really need dry track time and also to get some data of riding the bike on a track other than Sepang. I felt much happier than in Malaysia because it is a track I definitely like and we can see from the top three that it suits the Yamaha very well too. Immediately from the first exit I felt comfortable and knew my reference points quicker. It was easier for me to pick up the pace and we made some really good improvements and progress during the first four exits. We tried some set-up modifications to get an idea about my feedback and at that point we realized that we were going in the wrong direction and just as we came back to what I liked it started raining and that was a shame. I still need to improve a lot but the gap to the firs t six is not as big as Sepang and that is a positive. I followed Valentino for a short time today and it was a very interesting experience. I could pick up some things about riding technique and I could understand that I need to be a little smoother."