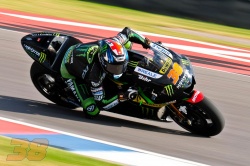 ​Bradley Smith will commence the second round of the 2016 World Championship two places behind his teammate after producing a determined effort in Argentina. The young Briton kicked off today by finishing FP3 in 13th, yet he forcefully topped the time sheets in Q1 with a time of 1'40.552 that allowed him to graduate straight through to the second practice. Here, Smith pushed onwards and set his personal best on the third lap, but his hopes of cutting this time further were halted when he fell at turn 1, in the final minutes of the session. However, the British star aims to undertake a rocket start tomorrow and join the battle for the top independent bike position in what will be a challenging race in the 25 lap Gran Premio Motul de la Republica Argentina.

Bradley Smith: – Position: 12th – Time: 1'40.893 – Laps: 5
"All in all, it was a bit of a disappointing QP2 after the successful session that we had before. The team found a few small changes at the end of FP4 which we used in qualifying and which helped us to make a good step. I did a really good job in QP1, so I was confident for the later practice, but I didn’t get to take advantage of the hard rear tyre in the final part. This was due to the fact that I locked the front going into turn one. It’s not anyone’s fault but I was just trying to push a bit too hard and I lost the front. It’s a big shame because if we look at the ideal lap times from both qualifying sessions, it’s clear to see that we could have been on the third row, which would have made everything easier for the race. However, it didn’t happen so we must ensure that we get a good start. The GP will be long and the tyres will play a critical part, but above all, I must not make any mistakes and find a good rhyme to feel comfortable with as I want to finish strongly.”