Smith maintains his rhythm for eighth in Argentina 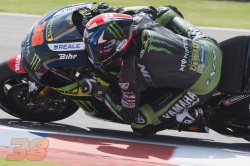 ​Bradley Smith persevered in the challenging Grand Prix and met the chequered flag two places behind his teammate. The Briton started from the fourth row, yet he was unlucky to run wide on the opening lap, to avoid contact with another rider, which caused him to drop to the back of the field. Nevertheless, he mounted his recovery charge and by lap eight he had overtaken six riders, before pitting half way through the event. Once back on the track, he maintained his rhythm and claimed 11th with a quarter of distance left to run. Smith continued his climb before powering across the line in 8th. This result marks his 26th consistent point scoring result, plus puts him in 6th in the longest successive point finishers in the premier-class.

Bradley Smith: – Position: 8th –Championship: 9th –Points: 16
"It was a very challenging race, but to score points is satisfying and the 8th position gives me more determination to finish in a better place next time. Today was tricky with the flag to flag and also with the conditions after the rain made things difficult this morning. Plus, there was a lot of dirt on the track and still some wet patches, so it goes without saying that it was tricky. When the Grand Prix started, I was a bit unlucky in the first corner and then again in turn three where I lost numerous positions because I wasn’t able to put myself in the right place. As a team, we made a big mistake because we chose a setting which we had never tried before and it really didn’t work. It was the same on both bikes and I really struggled to get any kind of feeling. I just kept telling myself that I only needed to get to the chequered flag, regardless of the position. Fortunately for us that meant 8th place which is the same as in Qatar, so we can’t be too disappointed. Still, there is a bittersweet taste in my mouth as the first satellite bike finished in fourth position and I’m sure that we could have done much better especially in these conditions. Yet, we finished and now we can go to Texas with a lot of useful information from what was a challenging weekend here and I’m sure there we will be able to put the Yamaha back to where it needs to be.”

Hervé Poncharal - Team Manager:
“Regarding the Monster Yamaha Tech3 Team, we have to be happy because we had to cope with a lot of difficult matters such as the weather, the dirty track and with this being the first time for the tyre manufacturers at this track. Even though we may have gained a few positions due to other riders failing to finish, we have to be proud of what Pol and Bradley did. Their results give us third position in the team championship which is fantastic. They tried hard from the word go and managed to bring some solid points home. It was a bit of a pity for Pol because he was holding fourth until the final lap, and there Barbera was a bit aggressive with him and they both ran wide which cost us two positions. The team did a great job as bike one and two were close to each other in terms of performance and finally, the guys managed to reach the chequered flag with two top finishes which is a good achievement in such tricky race conditions. So now we can leave here with a positive frame of mind. Next we head to Austin where we will be aiming for another double top eight finish and hopefully we can claim the first independent team position back which is what we should have got here.”