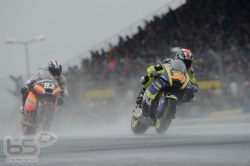 Bradley Smith's 100th Grand Prix appearance in the Tech 3 Racing Team's home race at Le Mans today turned out to be an eventful affair, with the British rider battling for a stunning podium before eventually finishing 10th.

A phenomenal start from 19th on the grid saw Smith finish the first lap in treacherously wet conditions in sixth place. Expertly understanding how hard he could attack on a soaking wet surface, Smith moved into the top three just five laps later to pursue Pol Espargaro and Thomas Luthi.

The 21-year-old's hopes though of securing a first rostrum of the 2012 World Championship campaign were ended by a small mistake while he was running in fourth on lap nine. Smith momentarily ran off track and re-joined the race in 14th, but immediately recovered his fast rhythm to launch a brilliant fight back.

He was back inside the top 10 on lap 17 and then superbly fought his way through to sixth on the final lap when he lost the front-end of his Mistral 610 machine at the last corner while fighting to claim his best result of the season.

He remounted to finish 10th, a result which moves him into eighth position in the World Championship classification.

Smith was the lone representative for the Tech 3 Racing Team in Le Mans today, with team-mate Xavier Simeon unfortunately unable to start the 26-lap race through injury.

The Belgian rider suffered a broken left hand and foot in a heavy qualifying crash yesterday. He will undergo surgery on the right hand in Belgium tomorrow (Monday) and begin his recovery.

Bradley Smith 10th – 24 points:
“It was an eventful way to mark my 100th race and I suppose it could have been better and it could have been worse. I had a brilliant first couple of laps and was quickly battling for the podium. It was difficult because I wanted to be aggressive and push but I had to be careful not to take too many risks with the conditions so tricky. The bike was sliding around a lot, particularly on corner entry, and that's why I ran off. I recovered my confidence and pace really quickly and it was great to battle my way back inside the top six. But I made a small mistake at the final corner and crashed. I'm happy because I could pick the bike up and still finish 10th and I was also very fast in the wet conditions. But I'm a little bit disappointed too because it was possible to fight for the podium, and that would have been an amazing way to celebrate my 100th race."

Herve Poncharal – Team Manager:
“Firstly I want to wish Xavier a speedy recovery. He had a big crash but fortunately after extensive checks in hospital, he has no serious injuries and he will be back in Belgium tomorrow where he is likely to have an operation on the broken hand. It was nice to see him in the garage today and everybody at Tech 3 Racing wishes him well and we hope to see him back on the Mistral 610 machine soon. The race was eventful to say the least. Bradley made an astonishing start and gained a lot of places and we were starting to dream of a podium, which didn't seem likely from the seventh row. In those difficult conditions it is difficult to be so precise on every lap and he made a slight mistake that dropped him out of the top 10. He rode brilliantly to get back into sixth and then crashed at the last corner, which is a big pity. He still got 10th but it should have been a better result and could have triggered a run of form like from Silverstone last year where he was incredibly strong and always at the front."