Smith meets chequered flag in 6th at the Brickyard 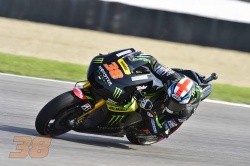 Monster Yamaha Tech3 Team rider Bradley Smith conquered the Indianapolis Grand Prix with a 6th place finish aboard the Yamaha YZR-M1 for round 10 of the 2015 MotoGP World Championship today. The British rider had a good start from the rear of the second row and completed the opening lap in 7th. Smith jumped past his teammate on the next lap and with him still hot on his heels, he set into his formidable race pace and pulled away from Espargaro whilst homing in on Andrea Iannone on the Factory Ducati.

With 10 laps having been completed, the 24 year old was still running in 6th and confident of closing the gap to the rider in front. As the lap numbers counted down, Smith upped his pace, setting his personal best on the 23rd as he continued to reel in the Ducati in front. The fight went right down to the final lap and the British star completed the 27 lap sprint just two tenths of a second behind 5th place and as the leading satellite rider once again.

Bradley Smith: – Position: 6th – Championship: 5th – Points: 97
"I have to be happy with the result today as it was another step forward. My most important objective was to start the second half of the season strong and keep the same level of performance from the beginning of the year, which I have been able to do. This weekend, the team always remained focused on the job ahead and it was capped by a strong result today making it a great weekend. However, I made a mistake at the start and I actually began the race with no launch control in first gear as I had changed to second just before the lights went out. Yet despite that, it was better than I expected and I won’t be making that mistake again in Brno! After the warm up this morning, I was a bit worried that we could struggle as it seemed that we did not have the pace at the beginning of the race but the Monster Yamaha Tech3 team and Bridgestone worked their magic for me and gave me a fantastic package. I must admit that I am a little disappointed that I couldn’t get past Iannone for 5th position but I was closer than I was in Sachsenring, so lets try and make another step in Brno."


Hervé Poncharal - Team Manager:
"It was a good race result for us and I am really proud of both riders, they did their best and rode hard from the word go. It was a very exciting race and Bradley had a very strong pace and pushed Iannone all the way to the finish flag. Passing the Ducati was just out of reach, yet despite this,  I am very happy with his performance all weekend because he has been really competitive and is the fastest satellite bike once again. Plus, Brad is now fifth in the championship standings and three points ahead of Dovizioso which means a lot to me. I am also happy about Pol’s performance. He had a great start and gave his all throughout the race which was not easy for him after the two crashes he had this weekend so I want to thank him for his ‘never give up’ attitude. He managed to keep Cal behind and we all know how fast Cal can be, so to finish in 7th and be only one point behind him in the championship makes us really happy. I think both of our guys are going to have another strong race very soon in the Czech republic, so lets regroup and continue in this manner. We are a happy team tonight and we are going to celebrate a bit back in Indy before taking the flight back to Europe.”