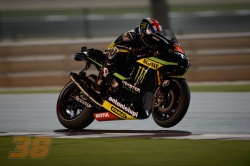 Monster Yamaha Tech 3 Team rider Bradley Smith will start the 2013 MotoGP World Championship from the third row of the grid in Qatar tomorrow night after a dramatic and tense new qualifying format.

A new qualifying system, which saw the fastest 12 riders go into a 15-minute shootout for pole position in QP2, created some pulsating action on track at the floodlit Losail International Circuit.

Bradley performed brilliantly last night in FP3 to ensure he was seeded straight through to tonight’s QP2 session.

Tonight was only the second time Smith has been thrust into full blown time attack mode and he delivered superbly when it mattered to finish in a fantastic ninth position. A best lap of 1.56.315 on the fourth of his eight laps completed secured him a place on the third row of the grid with Alvaro Bautista and nine-times World Champion Valentino Rossi. He is now confident that he can mark his MotoGP debut with a strong ride into the top 10.

Bradley Smith 9th 1.56.315 – 8 laps:
“I was really happy to make it into QP2, so to claim a place on the third row for my first MotoGP race is an incredible feeling. I’m particularly pleased because I only used one soft tyre in the 15-minute session and it looks like everybody else set their best time on their second soft tyre. I used an extra one last night in FP3 to make sure I made into the top 10 for QP2 and I want to keep another soft tyre for the Warm-up session to give me some feeling ahead of the race tomorrow night. So to be on the third row is better than I expected and to be in front of Nicky (Hayden) is a bonus. Hopefully tomorrow night I will be able to get in a battle. That’s the best way for me to learn how to ride this bike more and gain more experience, and I don’t have a target other than that."