Smith powers through the rain 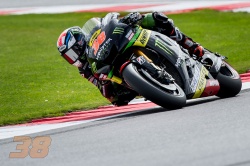 Bradley Smith undertook a solid effort as he battled the wet conditions at the Silverstone track to finish his home Grand Prix in 7th position. The 20 lap race began in chaotic conditions, as after the race was declared dry, rain started to fall on the warm up lap which caused the start to be stopped due to a red flag being shown. All riders switched to their wet bikes and when the GP began, Smith jumped forward as the lights went out and pushed to remain with the factory MotoGP riders. At the close of the first lap, the 24 year old was running in 6th position however, one lap later he was shuffled back to 9th. Nevertheless, the young Briton remained focused and moved up two places at the close of the third lap.

He was firmly in his race rhythm as he aimed to continue his climb, but he was overtaken by his teammate at the midpoint of the race and bumped back to 8th. Yet, Smith carried on fighting and with the five laps remaining, he was running in 7th position. He continued his work and after guiding his Yamaha YZR-M1 around the slippery 5.9 kilometre Silverstone circuit, he sped across the finish line in the same position.

Bradley Smith: – Position: 7th – Championship: 6th – Points: 115
“I have to be quite pleased with the end result as the conditions were far from ideal out there today but I did my best. I was a bit nervous on the grid about riding in the damp conditions as last year we struggled when it was wet, but we've improved the bike by more than 100% in terms of performance. Here, I was on average about 1.2 seconds a lap slower than the fastest guy, whereas in Aragon last year we were further behind in terms of times, so the team have done a fantastic job in giving me a bike that I can ride more confidently in the wet. I gave my absolute all to stay with the second group in order to try to fight for a podium, but at the end of the day they just had a bit more speed than me. So, I aimed to not make any mistakes and be as consistent as possible. I tried to hold off Redding in the final laps, as I really wanted to get the top six, but unfortunately he was too strong for me today. So overall, it's a damage limitation in a way as we did the best that we could, yet I am now behind Dovizioso by 5 points in the championship standings. Therefore, it was not an ideal day, but not terrible at all either. I want to say thanks to all my fans who came out to cheer for me today and next up for us is Misano in two week's time.”ll take this momentum with us to the next race.”

Hervé Poncharal - Team Manager:
"In all honesty, I am quite happy it is over! The weekend has been really intense and both guys did their best as they fought against the tricky conditions. We were very proud and happy to qualify on the second row yet we knew that the weather forecast was not great for today. However, in this morning's warm up, the results were quite encouraging and Brad and Pol both had a good pace in the damp conditions, Pol in particular. The start of the race was a bit chaotic with the red flag being shown at the very last minute, yet when the show finally started it was in full wet conditions. Pol had an incredible start and was really fast in the first few laps. However, he was unfortunate as he made contact with another rider and ran wide which is a real pity as I think he had the pace to have a great result this weekend. He re-joined the second group where Brad was and recovered quickly but on lap 15 he fell. It was a shame as he hasn't ridden many MotoGP races in the wet and there could have been a good finish today. Nevertheless, we are proud of him and he is clearly back to his true speed. As for Bradley, he has been promising in the dry this weekend but it was a challenging race for him today and the most important thing is that he brought the bike home and collected another good set of points. Although he lost 5th position to Dovizioso in the championship standings it was still a positive weekend for him. Up next is Misano where we hope for some great sunshine and blue skies."