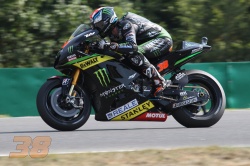 Monster Yamaha Tech3 Team rider Bradley Smith produced his best qualifying result of the year today as he shot to 5th position in the highly intense qualifying shootout at the bwin Grand Prix Ceske Republiky. The 24 year old, who currently sits in 5th in the MotoGP World Championship standings, got straight up to speed in this morning’s FP3 practice as he delivered a top time of 1’56.195, that left him in 4th position in the combined standings.

His performance saw him glide straight through to Q2 and once the 15 minute session began, the British rider jumped on his Yamaha YZR-M1 and launch into his qualifying campaign. Smith undertook seven laps at the 5.4 kilometre Brno circuit and produced an impressive time of 1’55.460 that was 0.125 quicker than last year’s pole position. In addition, his lap was fractionally behind third place by barely over a tenth of a second and tomorrow he will start the 22 lap race from the middle of the second row as he aims to clinch the leading satellite honours once again.

Bradley Smith: – Position: 5th – Time: 1'55.460 – Laps: 7
"I am very happy with my performance today as it is my second consecutivequalifying result on the front two rows after the summer break. This is especially rewarding because my main focus for the remaining races was to improve my grid positions as we lost too much time at the beginning of the races earlier this year. In FP4 we tried various different settings and some were positive and others were not as good but the team made a combination of these and in the end I went out on a bike in Q2 with a setting which I hadn’t ridden yet. It was a bit risky, but it turned out to be a good choice by the team and I have to thank them for their great work. I am only half a second from the pole time and again, I was fighting with the Factory Yamaha for the front row, and so I have to be happy. The top five riders were a big step above the other guys on the single lap pace, however I’m sure it will be different in the race. The important thing tomorrow will be to get a good start as it will be a long, tough one and so, tyre management is vital. We will try to make some small improvements tonight, especially for tyre preservation and I will test them tomorrow morning. However, I’m pretty sure that we have the right bike to do a good job"