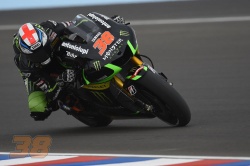 Monster Yamaha Tech3 Team’s Bradley Smith confirmed his status as the ‘one to watch’ for this season, by pulling off another positive qualifying performance. He cemented his 7th place on the grid for tomorrow’s inaugural race at the fast flowing 4806 metre Termas de Rio Hondo circuit in northern Argentina.

Smith focused on fine-tuning the race setup during the FP3 session, and evaluated which front and rear tyre compound would be the best for tomorrow's race, considering the ever improving track conditions.

The Monster Yamaha Tech3 rider showed complete resilience and sailed easily through from Qualifying 1 to Qualifying 2, even setting his best Q1 time on used tyres. He later confessed that the 15 minutes of extra track time had been an advantage as the young British rider rode his Yamaha YZR-M1 with agility around the meandering circuit and a best time of 1:38.958 which was less than a hundredth of a second behind multiple world champion, and Factory Yamaha rider Valentino Rossi.

Tomorrow Smith will once again aim to challenge for a top 5 position, and battle with the Factory MotoGP bikes.

Bradley Smith: 7th: 1:38.958:
“I am really pleased with 7th position going into tomorrow’s race. Participating in Qualifying 1 wasn’t part of the plan, but during FP3 I was concentrating on doing long runs with used tyres to make the best choice for tomorrow’s race. But in the end, it even helped us, as the extra track time enabled us to test a few more setting changes. This was especially beneficial as the bike was struggling a bit in the braking areas, which we managed to amend. I was able to go quicker on a used hard tyre during Qualifying 1 and then could further lower my lap time on the soft in Q2. Still, things could have gone better, because I knew the track was improving but I made a small error on my first flying lap on the soft, so the tyre’s grip dropped. If this didn’t occur, maybe I would have had a chance at the second row. It will be tough tomorrow as the track is evolving all the time. I think we need to race with the hard rear tyre as it will be the most consistent. My aim is to get a good start and try to remain with the Factory Yamahas.”