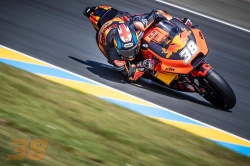 A promising early showing by Red Bull KTM Factory Racing at the historic setting of Le Mans for the Grand Prix of France converted into sixth row grid slots for Bradley Smith and Pol Espargaro for the fifth round of nineteen in 2018 MotoGP tomorrow afternoon.

The Brit and Spaniard circulated to top ten positions in FP1 on Friday and Pol Espargaro was a very encouraging 7th in FP2 the same day. Warm and breezy conditions were again in place for Saturday’s action and both riders continued work on the KTM RC16 with a view towards the 27 lap distance at 14.00 on Sunday. Bradley Smith struggled with inconsistent rear tyre grip and posted a time for 17th in Q1. Espargaro went for broke and was lucky to escape unharmed from a highside crash on his second flying attempt and ended the period with 18th place.


Bradley Smith (Factory Rider MotoGP):
“Everyone seems to be suffering with the same sort of problem at the moment and maybe having one of the softer compounds of the season here has something to do with it. It might be a false feeling of grip or some deformation. I don't believe it is down to the surface of the track. Michelin usually has such a lot of grip in the rear but it is catching us out a bit. I’m still trying to figure it out and some people are managing it. Here at Le Mans the corners are so long that you spend a lot of time on the side of the tyre and any issue is exaggerated. We are trying to find the key. The soft rear seems to be working better than the medium but I can ride with both so we’ll see tomorrow. Hopefully we’ll be going for points.”


Sebastian Risse (Technical Director MotoGP):
“To be fair we feel quite comfortable with our bike at this track. Of course the asphalt is sometimes quite cold and it might be on the limit with the tyre allocation because we see people running soft compounds but overall the bike is not so bad. The lap-times generally in Q2 were incredible and we have big respect for that. We think we could have done a bit better in the sessions and it was not so easy because of crashes and some other difficulties. But I’m quite confident tomorrow and I think we can have a good race. The target is top ten or more.”