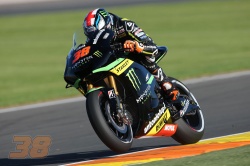 Bradley Smith delivered another sensational qualifying performance and he will start the last round of an immensely impressive rookie campaign just one position behind Crutchlow in sixth on the grid.

Smith challenged for a front row start throughout the 15-minute session, which took place in front of packed grandstands ahead of what is anticipated to be a sell-out crowd for tomorrow’s tense title shootout between Jorge Lorenzo and Marc Marquez.

Smith showed yet another outstanding Saturday afternoon display on his Monster Yamaha Tech 3 YZR-M1 machine and a fantastic lap of 1.31.201 rocketed him into the top three with just over two minutes of the session remaining.The 22-year-old remained on the front row until right at the end of the session when a late flurry of fast lap times dropped him back to the second row ahead of tomorrow’s 30-lap race.

His best lap was only 0.088s behind Crutchlow and he will start from the second row of the grid for the third time this season, aiming to secure a richly deserved top 10 finish in the final World Championship rankings.

Bradley Smith 6th 1.31.201 – 9 laps:
“Today has been a bit of a struggle to be honest. We tried a lot of things to improve the bike without any positive results, so for this afternoon we opted for a mix of today’s set-up and yesterday’s when I knew I was strong. As soon as I put the soft rear tyre in I felt really good and I put in a terrific lap. When I saw I was third fastest so close to the end of the session I thought I might get my best qualifying position. But I am really happy to be in the top six again and that equals my best grid position of the season. Hopefully I can get another good start like in the past races because tomorrow will be certainly tough with the hard tyre. I'm confident I will be more competitive and for sure i will give it my all and try to finish as close as possible to the front.”