Smith ready to fight for top ten in Estoril 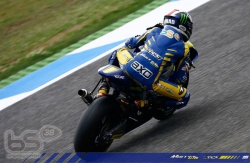 The British rider was just 0.5s away from a place on the second row of the grid as he bounced back superbly from a crash in tricky conditions in this morning's third and final practice session to post a best time of 1.42.743.

Heavy overnight rain had drenched the 2.599 miles circuit and despite no repeat of the downpours for practice and qualifying, the track remained treacherously damp in some sections throughout the whole day.

Smith was still able t o lap less than 0.3s away from the top ten and he is confident he can maintain his sensational start to his rookie campaign in the competitive Moto2 class. Smith will start tomorrow's 26-lap race in sixth position in the World Championship rankings having claimed a stunning fourth position in the previous race in Jerez.


Bradley Smith 15th 1.42.473 – 18 laps
“The qualifying session was not too bad but I just felt that there was a couple of areas from the crash this morning that upset the bike and also knocked my confidence a little bit. It took me a while to build up my pace and by the time I felt confident again I just ran out of time. It is a bit of shame because I felt pretty confident during practice and was hopeful of being a few places further up the grid. Starting from 15th is going to make it a difficult race and I've never been lower than the third row in Moto2. So I need to make sure I get a good start and keep out of trouble early on while pushing as hard as I can. I'm hoping for a dry race tomorrow but if it is wet then we have a really good rain setting too, so I feel we're prepared for whatever the conditions throw at us.”