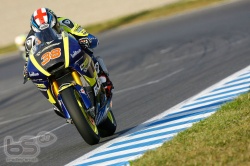 Tech 3 Racing Team rider Bradley Smith will start the Grand Prix of Japan with high hopes of scoring a first Moto2 podium finish of 2012 after impressive performances in practice and qualifying at the Twin Ring Motegi track.

Smith superbly built on the confidence gained from his podium challenge in an epic Motorland Aragon race last month to finish practice in an outstanding third position. A best lap of 1.51.792 left him only 0.191s behind World Championship leader Marc Marquez in second. And the 21-year-old started this afternoon's qualifying session in sunny conditions optimistic he could mount a challenge for a first front row start of the season.

With the Tech 3 Racing Mistral 610 machine coping well with the extreme braking sections at the stop and go Twin Ring Motegi, Smith was able to improve his pace to a 1.51.736 and he only missed the top six by just 0.096s.

Bradley Smith 7th 1.51.736:
“It's a little bit strange to say that I'm disappointed with a seventh position on the grid but after the weekend we have had so far where I was fast and competitive in every practice, I felt I could have done better. Unfortunately I had to qualify on a different tyre than what I would like to because of a small technical problem. So to do the lap time I did with this tyre was really quite impressive and I'm really happy. Marquez and Espargaro will for sure be the guys to stay with at the start of the race, so I've got to be aggressive from the start like always to put myself in contention right from the off. I know that the race pace is always a bit slower than the qualifying and I am normally strong during the second part, so I will try my best to battle for the podium.”