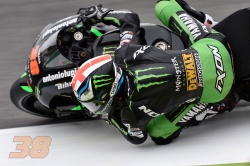 Bradley Smith produced a resolute display to guide his Yamaha YZR-M1 around the 13 corners of the Mugello circuit to score 7th place on the grid for tomorrow’s 23-lap sprint.

Having made progress in terms of building a confidence boosting setup this week with his Monster Yamaha Tech3 Team, the British rider progressed further by aggressively riding to a best time of 1.47,618 in Q2, over a second quicker than his qualifying time from last year.

Additionally with the pole position time being quicker last year, Smith’s best lap today was much closer to the front in comparison to the competition highlighting his leap in improvement with both performance and knowledge this season. In addition, it was only four tenths of a second off pole with the top twelve MotoGP riders being covered by under a second. The 23-year-old British rider remains optimistic in his race ability aboard the Yamaha YZR-M1 as he aims to be the fastest satellite rider in tomorrow’s race.

Bradley Smith: Position 7th - Time: 1'47.681 - Laps: 8
"I am pleased with my qualifying performances today and especially this morning’s FP3 session where I had a great feeling on the bike and some positive work was undertaken. In FP4 we weren’t as competitive from the word go as we would have liked to have been due to the changing nature of the track which required us to alter the bike to accustom it to the changing grip and temperature. The Tech3 team have a done a great job especially with qualifying and after we changed the setting, the bike felt good straight away giving me the confidence to run in the 47’s comfortably. I still need to improve in the third sector of the track especially Arrabbiata 1 and 2 but feel very comfortable with how the bike is in the first two sectors of the track. We need to make a good setting for sector three but on the whole I am happy to be competitive and back riding a bike I enjoy and understand, so I am excited for the race tomorrow.”