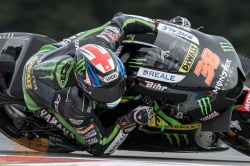 Bradley Smith endured a disappointing end to the event after unfortunately suffering with a technical issue which caused him to retire from the Grand Prix. The Briton leapt forward from the middle of the fourth row of the grid and quickly set about moving through the pack as he completed the opening lap in 9th. He was pushed back one position a short time later, but remained focused and did his best to preserve his tyres for the second part of the race. However, at the midway point, the 25-year-old had to pit due to a technical issue with eight laps left to run. Nevertheless, Smith fully aims to bounce back in front of his home fans at the British Grand Prix in a fortnight’s time.

Bradley Smith: – Position: DNF – Championship: 15th – Points: 42
"Of course, it’s disappointing to have another DNF for a technical issue, especially as my race was running positively up until that point. The opening lap went quite well, and I was able to make up a few positions plus, I felt quite comfortable on the bike. When the track started to dry, I could increase my pace and push harder so that I could go with the guys close to me. Still, at the same time, I was looking after my tyres because I was certain that tyre management would be crucial at the end of the race. Yet, unfortunately, I didn’t have the chance to prove that as I had to pit in. The riders who I was close to before I pitted, ended up finishing in 5th and 6th so this is where I would have seen myself at the end of the race and that definitely would have been a good result ahead of my home GP. Considering that it was one of the weekends where we were closer to the front from the word go, it’s a big shame, but also due to it being the second time I’ve had to retire because of a technical issue in 2016, which is just bad luck. However, with the test tomorrow, we will go over a few things which will boost my confidence for my home Grand Prix at Silverstone, which is up next."

Hervé Poncharal - Team Manager:
“On a day like today in the Czech Republic, we all know that anything can happen in the race due to the weather. This is the third time this season, after Assen and Sachsenring, that we have had very difficult and mixed conditions. Like a lot of riders on the grid, we went for the soft compound of tyre as it was the only one we tested and with a lot of standing water this morning in warm up, it worked well. When the track dried out, it was clear to see that the guys who gambled and chose the hard tyres had an enormous advantage. Our two boys did their best to stay on track and lose as few positions as possible. Unfortunately, Bradley had to pit and retire due to a technical issue, which is a shame because he was having a strong race until then. Pol bravely put his head down, reached the flag and got three points. The only thing that we can take as a positive is that Pol gained one position in the championship due to some DNF’s. This is more of a weekend to forget than one to celebrate, but hopefully, Silverstone will be dry and sunny. Plus, in addition, of course, I have to say congratulations to Cal for his victory today!”