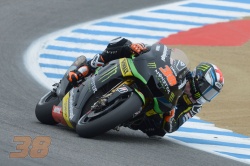 Today’s race, which marked the halfway stage of the 2013 MotoGP World Championship, ended in disappointing fashion for rookie Bradley Smith.

The 22-year-old had quickly settled into a fast rhythm in front of a crowd of over 46,000 fans and a top eight finish on his Laguna Seca debut looked comfortably within his grasp.

Smith was sizing up where he could overtake Nicky Hayden and Andrea Dovizioso later in the race when he was denied a seventh successive top 10 finish by a small technical issue with his Monster Yamaha YZR-M1 machine at the end of lap eight.

The Monster Yamaha Tech 3 Team now embarks on a well deserved summer break before the exciting 2013 World Championship campaign resumes with a third visit to America at the iconic Indianapolis Motor Speedway.

Bradley Smith DNF – 51 points:
“It is a shame that my race was ended by a technical problem today because my bike has been faultless all year. This can happen at any stage but unfortunately it happened in the race and now we will carry out a thorough investigation to find out what happened. Sometimes these things can happen and it was a shame because I was looking at finishing inside the top eight and that would have been a positive result. The race was going well and I was confident after being very strong in the warm-up because we made a good step with the bike. But then I had the problem and I have to accept that this is part of racing. The first half of the season has been very enjoyable and I have learned so much. I am feeling I am making big progress and now the summer break gives me the opportunity to rest my recovering left wrist and I can focus on coming back much stronger physically in Indianapolis.”

Herve Poncharal – Team Manager
“Unfortunately we can’t have Cal and Bradley inside the top six like in Germany every week and we knew coming here it wasn’t going to be easy. Laguna Seca has never been a happy hunting ground for us but of course we expected to show more of our true potential. It is a big pity for Bradley because he had a very strong weekend, especially being here for the first time on a track that is not the easiest to get a grip of. Unfortunately he could not finish the race because a technical problem but the job he has done so far gives us a lot of confidence that he will be stronger in the second half of the season. He has been learning fast and becoming more of a MotoGP rider and we have high hopes for him in the last nine races."