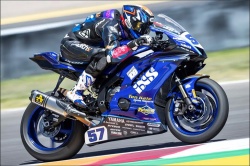 Smith was put back three places on the grid due to a penalty and on the opening lap after he had to swerve from an incident which dropped the Brit to 20th position. The 31-year-old debutant then had a good pace and managed to fight his way to the front. In the end, Smith crossed the finish line in fourteenth position, scoring two points for Ten Kate Racing in his first World Supersport race.


Bradley Smith:
“First of all, I’m happy to finish my first World Supersport race in the points. On one hand it was a bit frustrating with the incident on the first lap with Van Straalen, I had to dodge him and went through the grass. As a result, I lost all the positions I had gained and fell back to last place. We can definitely improve in the race tomorrow and starting without a grid penalty is going to help me.”

Kervin Bos – Ten Kate Racing Team Manager:
“What a day. It started pretty hectic this morning with Bradley getting a penalty, which in our opinion was not justified. Dominique rode behind Bradley and the FIM thought a penalty should be given for that, it’s just a shame he was put back three places for that when it wasn’t necessary at all. Bradley managed to move forward step by step after having to swerve from an incident on the opening lap, in the end he rode a good first race.”