Smith seventh in final round 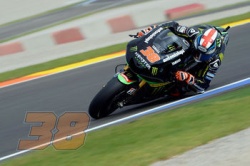 The 2013 MotoGP World Championship campaign ended with mixed emotions for the Monster Yamaha Tech 3 Team in Valencia this afternoon, with Bradley Smith racing to a hard fought seventh place in an enthralling season finale.

There was to be no fairy tale final appearance in the French-based squad though for Cal Crutchlow, who crashed unhurt on the 10th lap while he was in hot pursuit of the leading group in front of a capacity crowd of almost 105,000 fans.

Smith made one of his trademark sensational starts and he led the Monster Yamaha Tech 3 challenge for the opening six laps by brilliantly fending off a hard charging Crutchlow.

Crutchlow moved into the top six with a pass on Smith on lap six and he immediately launched a fantastic charge towards the leading group of five. But his quest for a 13th top six finish of an outstanding third season with the Monster Yamaha Tech 3 squad was ended prematurely by a crash a third of the way into the 30-lap title decider.

Smith’s 13th top 10 finish of a hugely impressive rookie campaign never looked in any serious doubt thanks to his stunning early pace and he finished in a comfortable seventh.Smith’s result concludes a fantastic final part of the 2013 campaign for the 22-year-old, who has finished inside the top eight in each of the last five races.

Today’s excellent display secured Smith a thoroughly deserved top 10 placing in the overall standings and he has made an invaluable contribution to ensuring the Monster Yamaha Tech 3 Team finished third in the Team World Championship rankings behind the Yamaha and Honda official factory teams.

Bradley Smith - 6th - 116 points:
Another seventh place, 116 points in the World Championship Standing and third place in the team standings should actually make me happy at the end of my rookie season. The gap to the fastest guys is less than 30 seconds again, and that is a positive end to the weekend, and a really positive way to end the year. I think we definitely showed good progress throughout the season and I want to thank my team for the amazing job they have done in teaching and helping me over the last 12 months in this really tough category. It has been a lot of fun as well and I'm really grateful to have such an experienced squad behind me. The next seasons starts on Tuesday already, and I'm really excited about it.

Herve Poncharal - Team Manager:
“We definitely have to be proud to be third in the Team World Championship again, behind Honda and Yamaha. Both Cal as fifth and Bradley ending his rookie campaign in 10th position have done a great job, so overall I think the year has once again been a really positive one. Bradley showed once again another strong performance and during the last third of the race his race pace was really close to what Bradl and Valentino did and that gives us also a lot of confidence for the next year. We are really happy about the progress Bradley has made after just one season and we are excited to see what he can show in 2014. We are also looking forward to welcome Pol in our team tomorrow, and even though he crashed today he showed again that he had the speed. For sure Pol will be another great rider for us to work with in 2014.  But today has also been very emotional for everybody at Tech 3 as we bid farewell to Cal. It has been a wonderful experience working so closely with him since 2011 and he feels like part of our family now. He has given us some magic and unforgettable moments and it is sad to see him leave. He has been an outstanding rider for us, Yamaha and Monster and I wish him tremendous success for the future.”