Smith seventh on the grid at Phillip Island 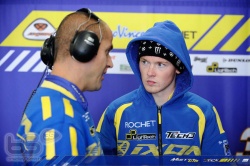 Bradley Smith will start tomorrow's race from seventh on the grid. The 20-year-old has been battling a heavy cold since he arrived in Australia but he didn't let that distract him on his way to recording a best lap of 1.34.867. That was only 0.293s away from pole position and just over 0.2s behind di Meglio and he has high hopes that he can fight for a fourth rostrum of the season tomorrow.

Qualifying started on a dry track but as heavy clouds hovered ominously over the fast and technical Australian venue, light rain started to fall that made it impossible to continue on slick tyres.

The weather disruption continued for the majority of the session and it was only in the final minutes that the surface had dried sufficiently for the field to begin an exciting time attack.

Bradley Smith 7th 1.34.867 – 12 laps:
“This afternoon's qualifying was quite complicated with the weather and I am happy to have done the lap time I did because the conditions certainly weren't ideal. The wind was very unpredictable and even at the end you had a few rain spots on the visor, so it was quite tricky to push with a lot of confidence. It would have been nice to be on the second row instead of the third but I'll be looking to get a good start and be aggressive in the first few laps like always. Looking at the lap times it could be a close and exciting race at the front, and I'm looking forward to it a nd being right in the middle of the battle.”