Smith signs off with a positive 9th place finish 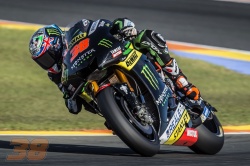 Bradley Smith ended his six-year partnership with Tech3 by concluding the 30-lap sprint in 9th after a determined performance at Valencia today. The Briton, who started from the head of the fourth row of the grid, quickly got on the pace as he weaved his way around the first lap, which he completed in 11th. He pushed onwards whilst battling against the tight and meandering track, and his strong lap times saw him open a comfortable gap to the following rider.

At just over the mid point of the GP, the 2015 leading satellite rider was back inside the top ten and running in 9th and from here, he maintained his consistency before meeting the chequered flag in this position. The result marks a positive end to what has been a challenging season for the 25-year-old, that has included a serious knee injury which he sustained in August. Yet, his strong will and determination saw him make his comeback after just seven weeks, and he scored some thoroughly impressive finishes whilst still recovering which helped the Monster Yamaha Tech3 team seize the top independent position in the team standings for the fifth consecutive season.

The whole team would like to express their thanks to Bradley for his commitment, passion and hard work over the years, plus also give their best wishes to the him for his future adventure.

Bradley Smith: – Position: 9th – Championship: 17th – Points: 62
"It was a tricky race, but I gave my all, and to finish in 9th is quite a positive way to end the season after what we’ve been through. We never really found the solution to my issues throughout the weekend, even though, of course, we tried everything that we could. However, for the GP, we definitely had the best setup. When it started, I pushed hard to try to stay with the Espargaro brothers and Cal. It looked like Pol had a bit more pace, especially in the second quarter of the Grand Prix and unfortunately I wasn’t able to remain with him. Although it may have been a bit of an ambitious aim, I was hoping to fight with Pol in our final race with the team. Anyway, at the midpoint, Crutchlow fell and after that, it was a case of finding as much rhythm as possible on my own because there was around a ten-second gap back to P10, plus Pol and Aleix were out of reach. Nevertheless, my main objective was to try to recover as much as possible before Valencia, so that we could get close to where we expect to be, which I feel we achieved with a solid top ten. I’d like to give a big thanks to the entire Tech3 team for all of their work in the past four years in MotoGP and two additional years before that in Moto2. I wish the guys the very best with the new riders for the 2017 season and I’ll come and say bonjour again in the future."

Hervé Poncharal - Team Manager:
“This race was a fantastic way to end what has been a brilliant season for MotoGP where there has been a lot of amazing battles and close competition. With regards to us, I am very proud of our two guys, and I think that throughout the weekend, both Brad and Pol have showed incredible fighting spirit and positivity. In this season finale, the weather was on our side, the boys played the game well and we ended up winning the top independent battle with Pol, and Bradley got some strong points in the championship. Both results are important because they helped to keep Tech3 as the best independent team in the standings for the fifth year in a row, which is a great achievement. We are all pleased with the performances of both riders but we are also a little sad to see our adventure come to an end with them. I would like to thank everyone once again; the riders, the entire team and I must also give a special thanks to Milena Koerner, who is leaving the team, for her efforts with Monster Yamaha Tech3 over the years. Hopefully, we will be able to spend some time together in the future.”