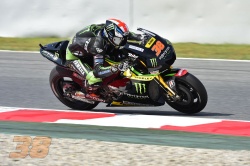 Monster Yamaha Tech3 Team rider Bradley Smith rode to another strong result aboard the Yamaha YZR-M1 at the Gran Premi Monster Energy de Catalunya to equal his best performance of the 2015 season and finish in 5th. The young British rider commenced the 25 lap battle from 8th on the grid and undertook an expert start as the lights went out before going on to finish the first lap in 6th. He quickly set into his race pace and posted strong lap times that elevated him up to 5th.

As the race distance progressed, he eventually became involved in a tussle with Andrea Iannone who he kept at bay until the 18th lap. Smith was shuffled back to 6th but remained resolute and pushed onwards. With five laps remaining he was running comfortably in 5th and powered across the finish line in this position. His performance today sees him close to one point of Marc Marquez in 5th position in the MotoGP riders championship standings.

Bradley Smith: – Position: 5th – Championship: 6th – Points: 68
"Fifth place is a fantastic result for us after what was a tricky weekend! The team did a superb job and we worked non stop every day to try and make a setting that we could use for the race. Eventually, we made a big step in time for the GP with the front setting of the bike, but maybe it was ultra conservative and it hampered me a little in terms of performance. Yet, it meant that I had a lot of feeling in the front which resulted in me knowing whether it was going to tuck or not and this was useful as we saw a few guys lose the front. However, even though it may have limited me a bit, I still managed to adapt to it in the first three laps and then I got into my rhythm. In all honesty, the pace was slow but it was the best that I could do and in the end, consistency is key as this result was great for the championship. Now I am just one point behind Marc and 21 ahead of Cal for the satellite bike battle which is strong from my point of view. We have a test tomorrow which will be interesting for us and we will look to amend the issues which have been affecting us in the past couple of race, that have all been quite similar. So it’s no rest for me and I plan to work hard tomorrow with the team so we can improve the bike for Assen and the remaining races this year."

Hervé Poncharal - Team Manager:
"Even though it wasn’t such a special race to watch, I must firstly congratulate Yamaha on their result today and also their domination in the MotoGP class this year. For the Monster Yamaha Tech3 Team riders, it was a bittersweet race and we knew the track situation would be tough as the surface was greasy. However, both of our boys had very strong starts and they were on each side of the front pack going into turn one. Pol then finished the first lap in 4th and Brad in 6th which was very promising but then unfortunately our Spanish rider was unable to finish the race, which surely would have gone well. It’s a big shame for him, the team and the season. On the other hand Brad had a very challenging race, but he used his head and was very sensible. I told him on the grid to be smart and he certainly did. He fought with Iannone but eventually let him through as he was quicker and so Brad used him to keep a good rhythm. It was another top five finish which is great and it’s quite surprising that after 7 races, Brad is just one point behind Marc Marquez! Furthermore, we are still on par with the Repsol Team which is very positive. Next up is Assen, where hopefully both riders will see the chequered flag.”