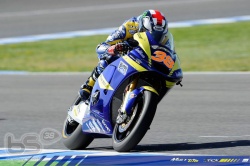 Bradley Smith's fantastic start to the 2011 World Championship campaign continued at the Jerez circuit in Spain today, the British rider qualifying on the second row of the grid ahead his second race in the ultra-competitive Moto2 series.

The 20-year-old posted a best time of 1.43.500 to finish just over 0.2s away from claiming a stunning maiden front row as he produced another impressive display on the Tech3 Racing Team's new Mistral 610 machine.

Taking advantage of the improved rear grip offered by a new rear linkage designed and built in the short time since he produced a dazzling Moto2 debut in Qatar last month, Smith was able to leave a host of big name rivals trailing beh ind him to finish less than 0.8s away from pole position. Smith, who won his first Grand Prix in the 125cc class at Jerez in 2009, is confident he can fight for his first top six finish in the Moto2 class.

Today proved a difficult challenge for French team-mate Mike di Meglio, who unfortunately was unable to match Smith's fast and consistent pace. He suffered a heavy crash during this morning's final free practice session and he started the qualifying session thanks to the hard work and effort of his Tech 3 Racing crew to quickly re-build his Mistral 610 machine.

But he was unable to find a comfortable setting and will start the first European race of the 2011 campaign from 29th on the grid, the former 125cc World Champion determined to deliver a positive result in the 26-lap race.

Bradley Smith 5th 1.43.500 – 20 laps
“This was a good day to finish fifth on the grid because Moto2 is very close and today was no exception. The front guys got into the 42s and there is a big group who ran in the 43s, so obviously I am very happy to be on the second row and right in contention. Considering the difficult day I had yesterday, I am really pleased with the way the bike was better today and in the afternoon we improved it again. I think we have a good chance of improving the bike a little bit more tomorrow morning because we have a few ideas to help improve my pace. We have quite a good base and I don't think we have to make any drastic changes for tomorrow, but we need to improve, particularly in the fourth section where I am losing most of my time compared to Stefan Bradl. The last sector is critical for the lap time but I can't complain with fifth. Moto2 is unbelievably competitive, so to be as high as I am so early in my first season is a big bonus.”