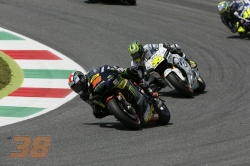 Monster Yamaha Tech3 Team rider Bradley Smith produced a superb performance at the Italian Grand Prix to clinch 5th and his fourth top six finish this year aboard the Yamaha YZR-M1. The young British rider began the race from 11th on the grid but highly confident of speeding to a top result after finishing this morning’s warm up in 5th place.

As the lights went out, Smith bolted forward to meet the first corner in 4th, having overtaken 7 riders before he completed the lap one place back. The following stages of the race saw him running in 8th and after posting a series of consistent lap times, his strong rhythm saw him locked in a battle with Cal Crutchlow at the mid point of the 23 lap sprint. The British star kept plugging away and with 20 laps completed he was in 6th before soaring across the finish line one place higher. The successful result elevates him to the position of the leading satellite rider in the 2015 MotoGP world championship standings and he now looks to ride to a similar placement at the Monster Energy Gran Premi de Catalunya.

Bradley Smith: – Position: 5th – Championship: 6th – Points:57
"I’m really pleased to close this weekend with a 5th place finish after a superb race that was a real pleasure to ride! Although my qualifying position was not fantastic, it spurred me on to get a good start, which is exactly what I did and then to come home with 5th is great for me, the team and the championship standings. I had fun battling with Cal and I really gave it my all, plus the bike was strong today, even though there are a few things that we need to address in the coming weeks. One of these was the handling of the bike in the beginning of the race, yet, there’s not a lot we can do with the setting to close the gap in the opening laps. I am sure Yamaha understands where we are struggling and I’m convinced they will do their very best to assist us in solving this in the future. Still, the bike is working really well at every track we have visited so far so I look forward to the next race in Barcelona, which is almost a home race for me because I live quite close by!"

Hervé Poncharal - Team Manager:
"It was a great race today and to have four Yamaha’s in the top six means a lot to me and for everyone else involved in this project. They are doing a superb job and we are really pleased to be a part of their MotoGP effort. With regards to Tech3, both riders did an excellent job and to illustrate how strong we are as a team at the moment, we are third in the team championship, ahead of the mighty Factory Repsol Honda team! We have worked really hard and apart from the Texas race with Pol, we’ve had no DNF’s. So our two, young riders have learnt to keep pushing and remain consistent. Today we completed the race only 15 seconds from the front and we all know how dominating Lorenzo was. There was an incredible fight between Cal, Brad and Pol for the leading satellite position and we came out first and second in this battle. However, I must say sorry to Cal as he is always in our hearts because he used to be a part of our team. Anyway, I will admit that I got a bit nervous towards the end of the race as we saw Pol close right in on Bradley and it would have been such a pity if there was a collision. Yet, fortunately they were both sensible and didn’t risk anything. For Brad, he worked more for the race than for qualifying, but had a great GP and a very strong weekend overall as he has been fast from Friday on. On the other hand, we have been thinking a lot about Pol because of his operation, which was a success and we saw him catching Cal and Brad at the end which means he is clearly more comfortable. His arm pump issue has been solved and it will allow him to understand how to improve more. We are very happy go to the Monster Energy Gran Premi de Catalyuna next, which is the home round for Pol, so lets see what we can do!”