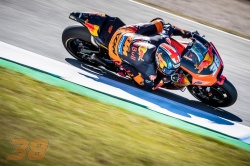 A 26 lap extravaganza of intense racing, overtaking and close-calls again demonstrated why MotoGP is one of the most watchable sports in the world.

Bradley Smith missed the points with his 17th position. The Brit, who boasts two podium finishes at Assen in two different categories, had to drop his speed due to a problematic rear tyre that affected his grip.

Bradley Smith (Factory Rider MotoGP):
“The first half of the race was good and I was in the same group as Pol but then something strange happened with my rear tyre and we hadn’t experienced anything like that all weekend. I had the same tyres as Pol we ended up pretty much on the canvas, so something went amiss there and we have to analyse everything. My tyre just fell off the earth and even in a straight line it was spinning. A frustrating way to end the race but these things happen. When the tyre was there I was competitive and fighting for points. I’ll just have to accept that today wasn't my day.”


Mike Leitner (Team Manager MotoGP):
“Even though it doesn't look like it on paper I think this was one of our better races of the year because we looked good in FP3, FP4, Warm-Up and then the race proved our form. Unfortunately we could show our potential in Q1 with a lap-time, and this is why we started far back on the grid and it did not help us for the race result. We have to fight for each position and it is tight and tough but 2018 has shown that we have settled in the middle of this 24-rider grid as a stable competitor and everybody at KTM should be proud of that. We’ll keep pushing and working to make the top ten consistently.”