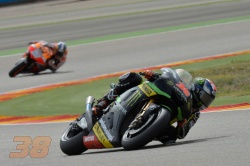 The Monster Yamaha Tech 3 Team celebrated one of its best double finishes of the season at the Motorland Aragon track this afternoon, with Cal Crutchlow racing to sixth spot and teammate Bradley Smith finishing in a fantastic seventh position.

Today’s race, which took place in the coolest conditions of the weekend, saw rookie Smith deliver one of his most impressive performances of the season.

Taking full advantage of improved braking performance after tweaking his riding style earlier this weekend, Smith finished in a terrific seventh position. The highlight of his race was his excellent charge away from experienced rival Andrea Dovizioso after passing the Italian on lap three.

The 22-year-old maintained a consistent pace throughout the race and one pleasing aspect of his performance today was he managed to finish just over 30 seconds behind eventual winner Marc Marquez. That improvement on recent races bodes well for the final races of the campaign, which includes three back-to-back flyaway races in Malaysia, Australia and Japan.

Bradley Smith 7th – 80 points:
"The positive point of today is that we scored our best result since Sachsenring and altogether it was good to stay in front of the Ducatis and especially to pull away from them at the end of the race was a nice feeling. I still believe that we have some more potential to improve our race setting . This will surely be our main aim for the flyaway races and I have no doubt that we will progress is this area. But all in all I can’t be unsatisfied with this weekend, especially considering how tough Friday was, when things did not really go according to plan, so to travel to Malaysia with a 7th position in my luggage is not too bad."

Herve Poncharal – Team Manager:
"I want to congratulate Bradley for the race he did. He did a really good job and managed to keep the two factory Ducatis a long way behind him and that is not easy, especially with Andrea, who we know is really fast on this track after his podium with us a year ago. At some stage he was lapping with the same times as Cal, Bautista, Bradl and Rossi, which is a big positive and I’m very pleased with the performance of both of them today."