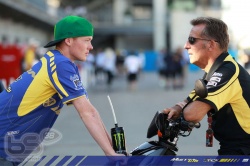 Bradley Smith is optimistic he can fight for a fourth Moto2 podium finish of this year's World Championship campaign after he came tantalisingly close to claiming a place on the front row of the grid for tomorrow's 26-lap race at the iconic Indianapolis Motor Speedway.

The Tech3 Racing Team rider was full of confidence going into this afternoon's hot and humid qualifying session after he'd finished sixth quickest in Free Practice.

The British rider has worked hard throughout the weekend to gain maximum grip, with the new surface on the infield section of the 2.62 miles circuit slippery and lacking in traction in the first two practice sessions.

Smith's efforts paid off as he delivered another excellent performance on the Mistral 610 machine and he clocked a best time of 1.44.344 to finish fourth fastest. Smith's best pace was only 0.186s away from recording only his second front row start in the ultra-competitive Moto2 class as he looks to add to the top three finishes he secured at Silverstone, Assen and Mugello earlier in the season.

Bradley Smith: 4th 1.44.344 – 19 laps:
"The target was to be on the second row at least and we've achieved that, so I'm really happy. With the new surface not offering a great deal of grip, there is only a narrow racing line and if you stray off that it can get very slippery. So it was important to be at the front and not too far down the grid where you'll need to make a few overtakes. Overtaking won't be easy at all if you have to go off line and I think everyone is going to struggle with the tyre life because with the new surface everything seems to be ripping up. The Tech 3 Racing Team has been working perfectly again and in every session we have been competitive. Now the objective is to focus on a good start tomorrow and fight for the podium. The last two races haven't turned out how we expected, so I am extra motivated and determined to get a good result tomorrow.”