Smith to begin Japanese GP from the 3rd row 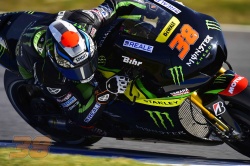 Monster Yamaha Tech3 Team rider Bradley Smith will kick off his campaign to finish Yamaha’s home Grand Prix as the leading satellite rider from back on the third row on the grid after an action packed Qualifying 2 session today. In the morning, the young Briton continued his setup work for the 24 lap sprint tomorrow and he rode a strong pace as he pushed onwards. He unfortunately suffered a crash in the final moments of the practice, yet his time of 1’45.250 from FP2 yesterday saw him finish in 9th overall and therefore safely through to the afternoon’s second qualifying.

The last free practice of the day saw Smith riding again with very consistent as well as fast lap times and as a result his confidence was high when the final shootout began. The session itself commenced slightly later due to a red flag being shown in FP4 because of another rider crashing. Yet, once the action commenced, the 24 year old dug deep and launched into his assault as he aimed to land a top grid position. However, when Smith was undertaking his second flying lap, luck went against him and he fell. He bravely remounted and raced back to the pits before changing to his second bike and then returned to the track with just over five minutes left to go. A short time later and whilst running in the last sector during another fast lap which would have placed him highly on the MotoGP grid, the Briton fell again. Yet, his best completed lap of 1’45.067, will see him begin the Motul Grand Prix of Japan from 9th position as Smith will intend to undertake a rocket start before he aims to meet the chequered flag inside the top six.

Bradley Smith: – Position: 9th – Time: 1'45.067 – Laps: 5
“First of all I want to start by apologising to the team for the extra work that I created today with my three crashes, which were all on laps where I was really pushing. A big thanks as well to Pol’s guys who helped out to make sure both of my bikes were ready for FP4. Aside from that I have to say that we had a very strong day and I am feeling confident for the race tomorrow as we know what we can achieve. Of course it is a bit disappointing to crash twice in Q2, but I know why it happened and the fact is that I pushed a bit too hard as I knew that if everything went perfectly then I would have probably been able to get onto the front row and so for myself, it was worth a try. The first fall was a pity as I locked the front going into turn five and the fork bottomed out. I could have picked up the bike but the electronics didn’t shut down fully so I had to jump on my second Yamaha. However, the front tyre on that M1 had already done 17 laps when I left the garage, so running at only 0.3 off the top time just before I fell was a bit too much! Both crashes were quick and I know that they happened because I was really at the limit. Nevertheless, I have a firm battle plan for tomorrow and I am feeling optimistic for the race after what happened in FP4. There, Jorge was behind me and didn’t make too many inroads into me and I set low 1’45 lap times as I have been for the entire weekend. I still believe a top five is a definite possibility and it is what I will be aiming for as my main ambition is to not lose many points on Dani and I have to try and stay in front of the Ducati’s. So, I intend to have a consistent race with a good start to conclude the first of the three back to back flyaway races solidly.”