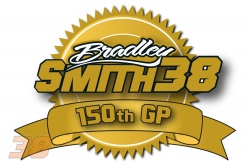 Bradley Smith will mark the milestone of competing in 150 Grand Prix’s in all classes, by starting his 2015 MotoGP campaign from the head of the third row of the grid after a brilliant display of determination in qualifying at Qatar. The young British rider started the day confidently by completing FP4 in 7th place, before challenging in qualifying session one. Here, the 23 year old rider undertook a superb effort in the dying seconds to post a time of 1’55.235 and move through to the second 15 minute shootout.

The final qualifying saw Smith meet the chequered flag in 7th place after speeding to a best lap of 1’54.732. This was all the more impressive in the fiercely competitive class with the first eleven riders of the grid being covered by under a second. Furthermore, Smith’s lap was only six tenths of a second from the pole position time and his qualifying performance sees him primed for tomorrow’s 22 lap sprint.

Bradley Smith: - Position: 7th - Time: 1'54.732 - Laps: 7
"I’m really happy with today’s performance and it’s pleasing to finish so close to the second row. I certainly didn’t make it easy on myself as I had to go through QP1! Yet, I think we’ve been battling with some tyre issues recently. The one I had yesterday wasn’t good and the same thing happened again in QP1 today but we didn't adjust anything else on the bike other than changing the tyre and I improved by half a second. It’s a bit of a gamble with tyres at the moment because of the test and the tyres have been warmed up and then cooled down quite a lot. Anyway, I will start the race from 7th on the grid and I will certainly be in the hunt for a good result. I am feeling optimistic and my race pace is positive so I’m confident of a strong finish to begin this year. I made it count when it mattered today and gave my absolute all, so although I didn’t help myself initially, we’ve pulled through and now I’m ready for tomorrow."