Smith to charge from the second row at MotoGP season finale 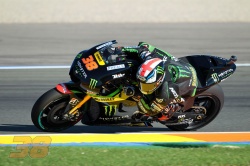 Monster Yamaha Tech3 Team rider Bradley Smith will battle from the second row of the grid after a spirited performance during qualifying today. The young British rider began his day with a run to 4th in FP3 which equalled 5th overall in the combined practice times and saw him pass directly through to qualifying 2. During the vital 15 minute session, Smith leapt into gear and produced a lap time of 1’31.012 that was only half a second from the front row. Tomorrow, he confidently seeks to seize a strong finish in order to clinch the leading satellite honours for the 2015 season.

Bradley Smith: – Position: 6th – Time: 1'31.012 – Laps: 9
"Obviously, I am very happy with my qualifying position for the last Grand Prix of the year. It was a really great performance by everyone involved and this was highlighted by the fact that we improved one and a half seconds from yesterday. As soon as we got going this morning, I felt much better with the bike and I was able to run consistently. In FP4 we tried three different options for tomorrow’s race so we have a good idea of which direction we need to head towards with the hotter conditions. At this circuit, especially in the morning, the track grip and bike performance is different compared to when we run in the afternoon. Anyway, for qualifying, I’m really happy with what we achieved as to be on the second row is important at such a tight and twisty track like this one. Furthermore, the lap times were close today and for sure, they will also be in tomorrow’s race. So all in all, I am pleased and the result in qualifying sets us up with a great chance to end the season in a positive way.”