Smith to commence the Australian Grand Prix from 12th 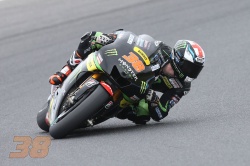 Bradley Smith gave his all in the Qualifying 2 session today and will begin the Australian Motorcycle Grand Prix from the fourth row on the grid. The 24 year old began the day by carrying on his setup work of his Yamaha YZR-M1 in order to combat the lack of grip that was affecting him yesterday. After progressing step by step, he eventually shot across the finish line at the end of the FP3 session, whilst setting a lap time of 1’29.877 that saw him clinch 9th and pass through to QP2.

Once the crucial 15-minute qualifying fight commenced, Smith got straight into the groove and remained optimistic of seizing a solid starting position for tomorrow’s 27 lap sprint. By the time the shootout had finished, the young Briton had undertaken a total of nine laps with his fastest lap being a 1’29.626, which saw him qualify in 12th position. Now, Smith, who is the leading satellite bike in the World Championship standings, will once again fully intent to produce a rocket start and then battle through the field as he aims for a strong finish down under.

Bradley Smith: – Position: 12th – Time: 1'29.626 – Laps: 9
“It goes without saying that qualifying in 12th is not what I wanted to achieve today, yet I am confident that I can recover well and still have a good finish here. We managed to partly amend the rear grip issue that we struggled with yesterday which is positive but, unfortunately, we didn’t improve on the whole as much as we needed to. This is somewhat due to the crash that was on my out lap at turn four in FP4, where I made a slight mistake. This lost us some time as we wanted to use both bikes to try some different settings. With regards to qualifying itself, during my first run I struggled to warm up the tyre properly, so my time wasn't very fast. Then, on my second outing, I set a 1’29.6 which was better and would have been a good lap time to improve from if I had set it during my first sequence of laps, but unfortunately the session ended. For tomorrow we need to continue our work as there are a few things that need enhancing, so therefore it will be a busy warm up session for us. Yet, my rhythm itself is not too far off the pace and I think we can make some changes to boost my performance more. For sure, it will be a long GP and starting from 12th will make things a bit more difficult, yet I am convinced that with a good start we can recover several positions. After that, I expect there to be a lot of close fighting, so I aim to get into the pack and push hard for a solid result.”