Smith to lunge forward from the third row 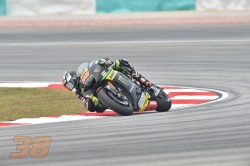 Monster Yamaha Tech3 Team rider Bradley Smith will kick start his mission to finish as the leading satellite MotoGP bike in the penultimate round of the 2015 MotoGP season tomorrow from the third row of the grid. The Briton leapt on board his Yamaha YZR-M1 as the day began and quickly resumed his setup work with the team in FP3, whilst determined to lower his lap time further. Yet, the 24 year old finally completed the shootout in 12th, just over two tenths from the top ten, which meant that he would have to compete in Q1.

Smith remained resolute and met the opening qualifying 1 confident of progressing to the final practice. After rapidly getting up to speed, the Monster Yamaha Tech3 rider powered to a lap of 2’00.765 which saw him finish in second and able to comfortably pass through to QP2. When the session commenced, Smith went back out on track with a strong grid position his sole target. The Briton consistently improved and after powering onwards, he sped to a top time of 2’00.652 on his final lap out of seven which saw him clinch 9th position. For tomorrow’s race, Smith aims to fight through the field and end what will be a challenging Grand Prix at the front of the satellite MotoGP bike battle.

Bradley Smith: – Position: 9th – Time: 2'00.652 – Laps: 7
“I have to say that today as a whole went much better than yesterday and the end result is quite satisfying. The team worked really hard last night to give me a good bike that I felt much more confident with, so we have to say that we definitely made some significant steps forward as we found the best direction to head towards for this circuit. Of course, running in QP1 was never part of the plan, but actually I am pleased that I did as it gave us a bit more time to make some final adjustments before Qualifying 2. In terms of lap times, we partly closed the gap to the Factory Yamaha riders which is a real positive. The pole time was very quick today and for sure, it was out of reach for me, yet when we compare our best lap to the other riders on the same bike, we were close enough. The most significant aspect about today’s result is that I will start on the same row of the grid as Dovizioso, who is my championship rival which means that I have a good chance of passing him on the run down to the turn one. We need to work a bit more on my rhythm in warm up, but I am confident about the race now as we definitely went in the right direction today. With a good start tomorrow, I am confident that I can get back into a position I want to be in and I will fight as much as possible in the 20 lap battle.”